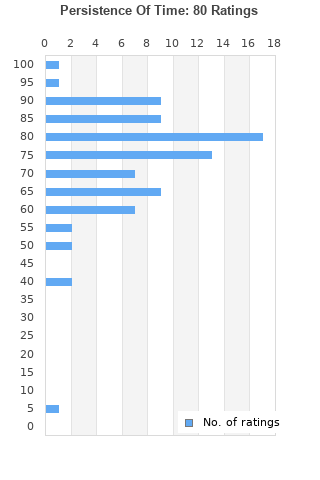 Persistence Of Time is ranked 3rd best out of 20 albums by Anthrax on BestEverAlbums.com.

The best album by Anthrax is Among The Living which is ranked number 1919 in the list of all-time albums with a total rank score of 883. 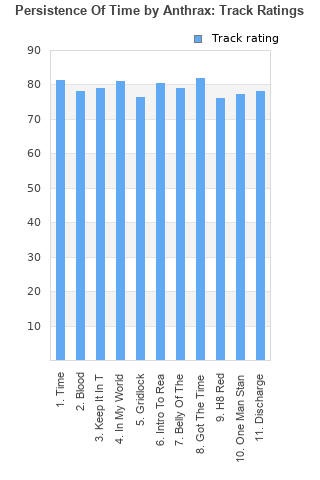 Rating metrics: Outliers can be removed when calculating a mean average to dampen the effects of ratings outside the normal distribution. This figure is provided as the trimmed mean. A high standard deviation can be legitimate, but can sometimes indicate 'gaming' is occurring. Consider a simplified example* of an item receiving ratings of 100, 50, & 0. The mean average rating would be 50. However, ratings of 55, 50 & 45 could also result in the same average. The second average might be more trusted because there is more consensus around a particular rating (a lower deviation).
(*In practice, some albums can have several thousand ratings)
This album is rated in the top 19% of all albums on BestEverAlbums.com. This album has a Bayesian average rating of 74.4/100, a mean average of 73.7/100, and a trimmed mean (excluding outliers) of 74.6/100. The standard deviation for this album is 14.3.

Great album. One of Anthrax's best. Bit more ferocious than some of there earlier stuff. Some of there best ever songs are on this, 'Intro to Reality' segueing into 'Belly of the Beast' being my pick of the bunch.

The last 'proper' album of Anthrax's best era. Good, but cover version, Got the time, is the standout.

The first Cd i bought in the far 1990, so of course i am biased (lol). Powerful songs, with a wall of guitars, a nice album from Anthrax, with longer songs more elaborated in the centre.

Can't believe this album is ranked below Sound of White Noise or as low as it is overall. This is a very tight, powerful album and probably the most mature Anthrax album considering most of their early albums had an element of piss-taking and lads just having a thrashing good time.

Really great songs on the last real Anthrax record. Among The Living, State Of Euphoria and A Fistful Of Metal is really something to check out as well. Post-persistance is disappointing

Your feedback for Persistence Of Time