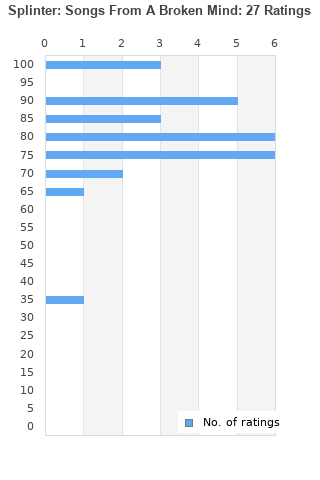 Splinter (Songs From A Broken Mind), Machine Music USA, Inc., Audio CD
Condition: Like New
Time left: 8d 9h 8m 44s
Ships to: Worldwide
$18.70
Go to store
Product prices and availability are accurate as of the date indicated and are subject to change. Any price and availability information displayed on the linked website at the time of purchase will apply to the purchase of this product.  See full search results on eBay

Splinter (Songs From A Broken Mind) is ranked 6th best out of 65 albums by Gary Numan on BestEverAlbums.com.

The best album by Gary Numan is The Pleasure Principle which is ranked number 1445 in the list of all-time albums with a total rank score of 1,230.

Get the Led Out
Scottish Rite Auditorium, Collingswood, United States.

Listen to Splinter (Songs From A Broken Mind) on YouTube 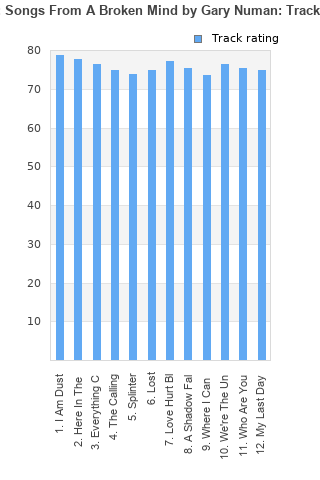 Rating metrics: Outliers can be removed when calculating a mean average to dampen the effects of ratings outside the normal distribution. This figure is provided as the trimmed mean. A high standard deviation can be legitimate, but can sometimes indicate 'gaming' is occurring. Consider a simplified example* of an item receiving ratings of 100, 50, & 0. The mean average rating would be 50. However, ratings of 55, 50 & 45 could also result in the same average. The second average might be more trusted because there is more consensus around a particular rating (a lower deviation).
(*In practice, some albums can have several thousand ratings)
This album is rated in the top 2% of all albums on BestEverAlbums.com. This album has a Bayesian average rating of 79.9/100, a mean average of 80.9/100, and a trimmed mean (excluding outliers) of 83.0/100. The standard deviation for this album is 13.4.

The new nine inch nails album sounds like it continues where "The Fragile" left off. So does this album. However, if you want to hear what the new nine inch nails album could've been under an alternate reality where the tracks donned less keyboards and were less like dance tracks and more like the alt-industrial "The Fragile" left off with, then you're in luck with Gary Numan. I haven't really listened to his stuff since the 80's, but i was pleasantly surprised with the stylistic shift (that supposedly happened a few albums prior) from new wave 80s synth to this industrial rock. These tracks do NOT resemble his 80s work, so please wipe that from your mind. Instead, if industrial rock is your thing, i invite you to try the new Numan.

Your feedback for Splinter (Songs From A Broken Mind)