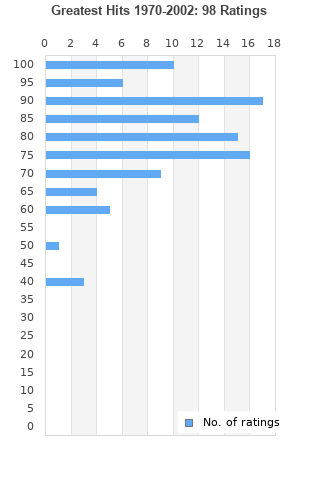 Elton John : Greatest Hits 1970-2002 CD 2 discs (2002)
Condition: Very Good
Time left: 3h 13m 41s
Ships to: Worldwide
£0.79
Go to store
Product prices and availability are accurate as of the date indicated and are subject to change. Any price and availability information displayed on the linked website at the time of purchase will apply to the purchase of this product.  See full search results on eBay

The best album by Elton John is Goodbye Yellow Brick Road which is ranked number 218 in the list of all-time albums with a total rank score of 8,821. 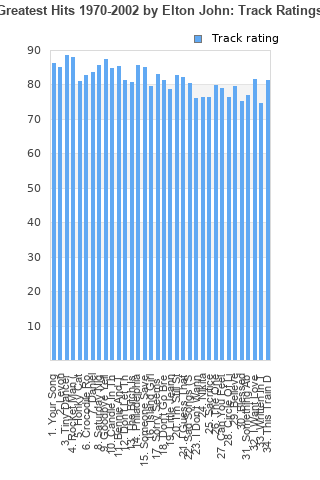 Rating metrics: Outliers can be removed when calculating a mean average to dampen the effects of ratings outside the normal distribution. This figure is provided as the trimmed mean. A high standard deviation can be legitimate, but can sometimes indicate 'gaming' is occurring. Consider a simplified example* of an item receiving ratings of 100, 50, & 0. The mean average rating would be 50. However, ratings of 55, 50 & 45 could also result in the same average. The second average might be more trusted because there is more consensus around a particular rating (a lower deviation).
(*In practice, some albums can have several thousand ratings)
This album is rated in the top 1% of all albums on BestEverAlbums.com. This album has a Bayesian average rating of 81.0/100, a mean average of 80.5/100, and a trimmed mean (excluding outliers) of 81.8/100. The standard deviation for this album is 13.3.

An album full of great songs. Tails off somewhat towards the end but the first 2/3rds / 3/4 are fabulous.

Elton John is a great hit master! I think he is better than the Beatles.

The first disc is good tracks 1-17, Disc 2 18-34 is very mediocre, there is a third disc on the limited edition which is much better than the second disc here. Overall its just the singles that were "hits" by no means reflecting "his best". Most of Elton's best songs were never released as singles. He himself admits that he did not take much control over what was released as a single leaving it to others. Disc 1 is great but the rest pulls this down to 70/100.

Drives home how brilliant his 70s work was, and how bland his 80s-90s work was. It's also illustrates how much of a singles artist he was.

If your only gonna have one Elton John album this is the one.

I think Elton John is an artist you should buy the "Greatest Hits" kind. Many attractive songs such are Nikita, I guess that's what they call it the blues, Blue Eyes, Your song 2002 are included here.

Best greatest hits to own by Elton. Will always enjoy Tiny Dancer.