Because The Internet (studio album) by Childish Gambino 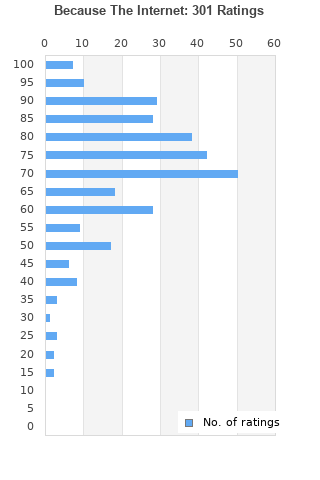 Because The Internet is ranked 2nd best out of 11 albums by Childish Gambino on BestEverAlbums.com.

The best album by Childish Gambino is "Awaken, My Love!" which is ranked number 724 in the list of all-time albums with a total rank score of 2,554. 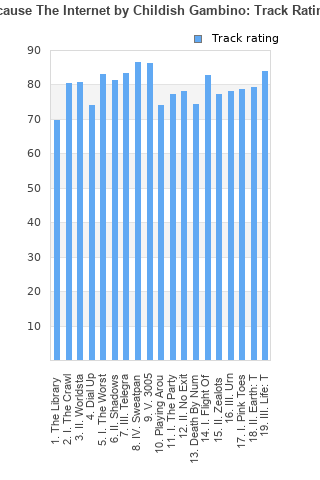 Because The Internet rankings

Because The Internet collection

Because The Internet ratings

Rating metrics: Outliers can be removed when calculating a mean average to dampen the effects of ratings outside the normal distribution. This figure is provided as the trimmed mean. A high standard deviation can be legitimate, but can sometimes indicate 'gaming' is occurring. Consider a simplified example* of an item receiving ratings of 100, 50, & 0. The mean average rating would be 50. However, ratings of 55, 50 & 45 could also result in the same average. The second average might be more trusted because there is more consensus around a particular rating (a lower deviation).
(*In practice, some albums can have several thousand ratings)
This album has a Bayesian average rating of 71.8/100, a mean average of 71.0/100, and a trimmed mean (excluding outliers) of 71.7/100. The standard deviation for this album is 16.3.

Because The Internet favourites

Because The Internet comments

I've been sleeping on this brilliant piece of experimental hip hop

Not without its highlights, but Awaken My Love is far and away better than this

Solid album that encapsulates well the vibe of the internet.

God damn, Pitchfork...
“The best thing about the album is the production”...
AS IF THAT’S CRITICISM. This is why I sometimes hate Pitchfork; they literally said “a big part of the music is great: 5.5/10”. How does that shit make sense? Unless you think the message is the most important part of music.

Honestly, I have no fucking idea what any of the messages on the songs are (I might one day look into it), but since that’s not part of the music:
I love the production too, I also love Gambino’s flow from time to time. Nothing too original musically, though. So 8/10.

This is a very good album i am noticing though that on repeated listens i tend to like it a little less than my initial reaction. Still a great work of art.

A really agressive Rap album! Great mystic and awesome beats.. 3005 and Sweatpants are the best tracks

Your feedback for Because The Internet