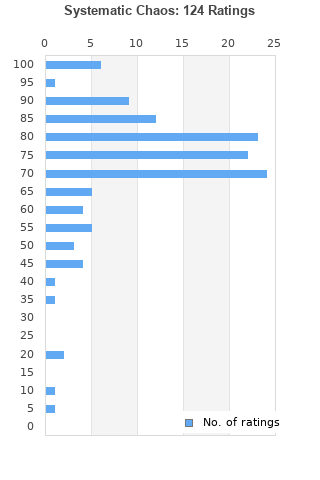 Systematic Chaos is ranked 8th best out of 35 albums by Dream Theater on BestEverAlbums.com. 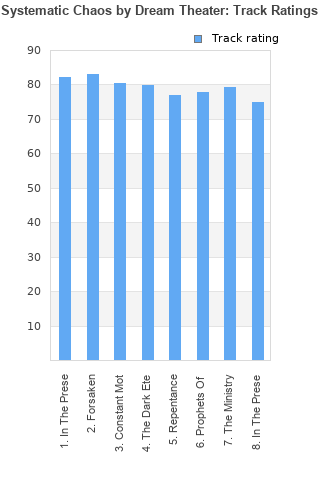 Rating metrics: Outliers can be removed when calculating a mean average to dampen the effects of ratings outside the normal distribution. This figure is provided as the trimmed mean. A high standard deviation can be legitimate, but can sometimes indicate 'gaming' is occurring. Consider a simplified example* of an item receiving ratings of 100, 50, & 0. The mean average rating would be 50. However, ratings of 55, 50 & 45 could also result in the same average. The second average might be more trusted because there is more consensus around a particular rating (a lower deviation).
(*In practice, some albums can have several thousand ratings)
This album is rated in the top 23% of all albums on BestEverAlbums.com. This album has a Bayesian average rating of 74.5/100, a mean average of 72.6/100, and a trimmed mean (excluding outliers) of 74.6/100. The standard deviation for this album is 16.9.

The album starts with part 1 of In the Presence of Enemies and ends with part 2. This is a truly great, great Dream Theater song and features elements of everything they do so well. In between it's more average though.

The Ministry of Lost Souls and the Dark Eternal Night are interesting.

Underrated record and the last Dream Theater album (so far..) that I would recommend from beginning to end. Some tremendous moments of Dream Theater's fervor for next level musicianship meeting undeniable melodic hooks.

I feel like this is much better than the overblown Octavarium. It has its weaknesses, but Octavarium was just so cheesy at moments (particularly The Answer Lies Within and I Walk Beside You, the chorus sounds like U2 which is not a good sound for Dream Theater). Dark Eternal Night is Dream Theater doing what they do best, going over the top with technicality and weird time signatures and it's amazing. And In the Presence of Enemies is a great song. I do feel like Prophets of War is fairly weak, but it's still alright. Overall, probably their second best album of the 2000s after Six Degrees of Inner Turbulence.

I think Dream Theater dropped the ball a little bit here. On first listen, I found the album to be satisfactory, but repeated listens just drag it down. It's too cheesy and overblown for my tastes, especially since Octavarium promised a more atmospheric and mature direction. Songs like The Dark Eternal Night are just...juvenile. Maybe DT was going through a mid-life crisis?

Nevertheless, the album's single has its moments and Forsaken is wonderful. I also feel this album has one of the strongest opening 3 minutes. Ever. Too bad it didn't meet the high expectations.

Your feedback for Systematic Chaos