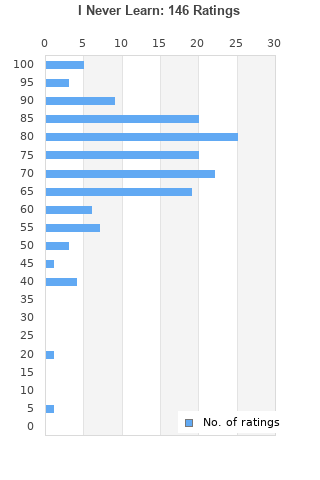 LYKKE LI - I NEVER LEARN NEW CD
Condition: Brand New
Time left: 10h 4m 21s
Ships to: Worldwide
$10.10
Go to store
Product prices and availability are accurate as of the date indicated and are subject to change. Any price and availability information displayed on the linked website at the time of purchase will apply to the purchase of this product.  See full search results on eBay

I Never Learn is ranked 2nd best out of 4 albums by Lykke Li on BestEverAlbums.com.

The best album by Lykke Li is Wounded Rhymes which is ranked number 2284 in the list of all-time albums with a total rank score of 681. 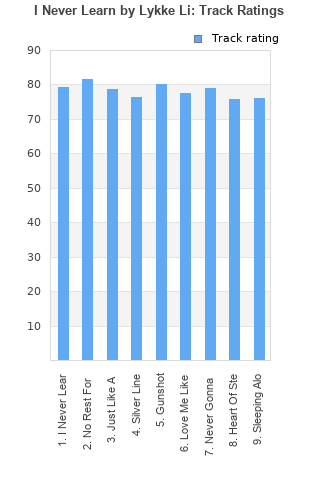 Rating metrics: Outliers can be removed when calculating a mean average to dampen the effects of ratings outside the normal distribution. This figure is provided as the trimmed mean. A high standard deviation can be legitimate, but can sometimes indicate 'gaming' is occurring. Consider a simplified example* of an item receiving ratings of 100, 50, & 0. The mean average rating would be 50. However, ratings of 55, 50 & 45 could also result in the same average. The second average might be more trusted because there is more consensus around a particular rating (a lower deviation).
(*In practice, some albums can have several thousand ratings)
This album has a mean average rating of 73.0/100. The trimmed mean (excluding outliers) is 74.0/100. The standard deviation for this album is 14.9.

I Never Learn is the resulting album from a painful breakup that led Lykke Li to move from her native Sweden halfway around the world to Los Angeles. While I've never done anything as extreme as that, I did move up 4,000 feet in elevation and into an 1880s mining cabin soon after a similarly painful 2014 breakup. So the themes in songs like “Love Me Like I’m Not Made of Stone," “Never Gonna Love Again," “Heart of Steel," and “Sleeping Alone” are all too familiar to me. This ballad-heavy, highly theatrical album hits hard, and makes effective use of Lykke Li's considerable talents as both singer and songwriter.

This is a really beautiful, aching album. If you want to mope for a little while, or just enjoy some beautiful arrangements, you should check this out.

Not as good as her previous albums

I've been waiting for Lykke Li to find her sound ever since her 2008 debut. That album, and the follow-up, were promising Swedish dance-pop, but they were missing something. On this release, she's managed a solid collection, including a couple of real standout tracks. I suspect her best album is still to come, but this gets most of the way there.

Have honestly not been that much of a fan of Lykke Li until this album. She showcases a variety of songwriting as well as honesty. Enjoyable to listen to.

Not as memorable as her previous albums, but Lykke sounds more confident in her identity as an artist. Maybe if this was the first work of hers I heard, I'd find it more special, but right now I'm looking for an album that sounds like nothing I've heard before or takes a whole lot of chances.

Your feedback for I Never Learn