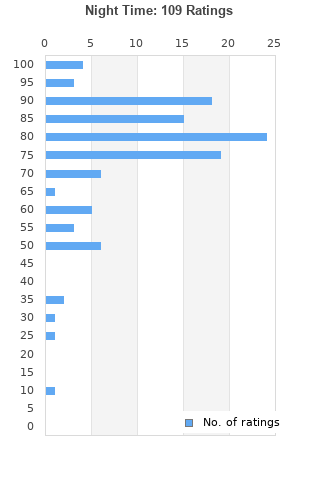 Night Time is ranked 2nd best out of 26 albums by Killing Joke on BestEverAlbums.com.

The best album by Killing Joke is Killing Joke which is ranked number 1999 in the list of all-time albums with a total rank score of 838. 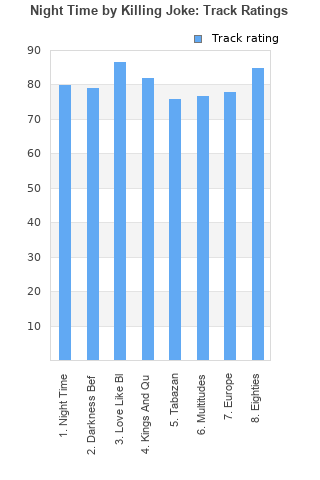 Rating metrics: Outliers can be removed when calculating a mean average to dampen the effects of ratings outside the normal distribution. This figure is provided as the trimmed mean. A high standard deviation can be legitimate, but can sometimes indicate 'gaming' is occurring. Consider a simplified example* of an item receiving ratings of 100, 50, & 0. The mean average rating would be 50. However, ratings of 55, 50 & 45 could also result in the same average. The second average might be more trusted because there is more consensus around a particular rating (a lower deviation).
(*In practice, some albums can have several thousand ratings)
This album is rated in the top 13% of all albums on BestEverAlbums.com. This album has a Bayesian average rating of 75.3/100, a mean average of 74.7/100, and a trimmed mean (excluding outliers) of 75.6/100. The standard deviation for this album is 17.6.

Eighties how I loved the 80's. The album is decent but nothing really jumps out at you except for Eighties

The best album by Killing Joke. It contains the perfect merge between their punk image from "What's THIS For?" and the (soon to be) commercial music from "Outside The Gate".

Excellent album. Highlight is the monumental Love Like Blood

I have to agree that lyrically, "Come As You Are" is a stronger result than "Eighties". This didn't prevent me from enjoying this album.

perhaps kurt cobains' real genius lay in his ability to plagiarise a crap song and turn it into a great one..

I'm suprised that I'm the first to rate this, considering the "Eighties/Come As You Are" debacle. In any case, this whole album is the epitome of cool. It's legit. You guys need to go to more goth clubs.

Your feedback for Night Time