Ixnay On The Hombre (studio album) by The Offspring 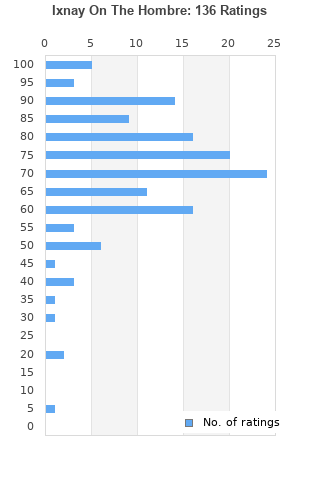 Ixnay On The Hombre is ranked 3rd best out of 12 albums by The Offspring on BestEverAlbums.com.

The best album by The Offspring is Smash which is ranked number 811 in the list of all-time albums with a total rank score of 2,287.

Tis the Season with The Beach Boys
The Paramount, Huntington, United States. 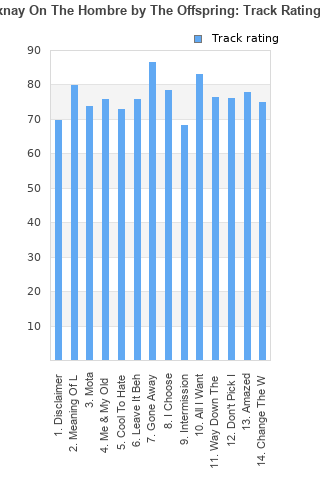 Ixnay On The Hombre rankings

Ixnay On The Hombre collection

Ixnay On The Hombre ratings

Rating metrics: Outliers can be removed when calculating a mean average to dampen the effects of ratings outside the normal distribution. This figure is provided as the trimmed mean. A high standard deviation can be legitimate, but can sometimes indicate 'gaming' is occurring. Consider a simplified example* of an item receiving ratings of 100, 50, & 0. The mean average rating would be 50. However, ratings of 55, 50 & 45 could also result in the same average. The second average might be more trusted because there is more consensus around a particular rating (a lower deviation).
(*In practice, some albums can have several thousand ratings)
This album has a Bayesian average rating of 72.4/100, a mean average of 71.5/100, and a trimmed mean (excluding outliers) of 72.4/100. The standard deviation for this album is 15.8.

Ixnay On The Hombre favourites

Ixnay On The Hombre comments

My favorite Offspring album. They'd become better song writers. Vocals had massively improved. They still had the up tempo formula of music but with this album there was a lot more variety among the songs. Overall a great album.

I actually think this has a harder edge than Smash. Thus it has less obvious, immediate killer songs. They then went more mainstream with the pop-punk of Americana which was catchy but had zero substance. Mota is a superb track on Ixnay and it still gets me up and about.

Lots of nothing special punk on this, but All I Want and Gone Away are great. I choose also isn't part of that nothing unique, but it's only ok.

Offspring stalled out. While Green Day improved and then became pretentious, Offspring tread water. Not bad, but nothing of significance.

Honestly a pretty good album that should not have been as overlooked as it was. They go a little more poppy but it doesn't work here as well as it would on Americana.

Oh, those lost days I would spend playing Crazy Taxi for hours on end to All I Want. I can still remember hauling all those ingrates to Tower Records and KFC. It's pretty funny that despite having that nostalgia bomb and the classic Gone Away, this really is not a very good album. :/

Disclaimer and Change the World were the best tracks!

Does not deliver the way it's predecessor did (or it's follow-up), but still manages to pack a bit of a punch. No instant hits, although The Meaning of Life, Mota and Way Down the Line stick out.

Your feedback for Ixnay On The Hombre