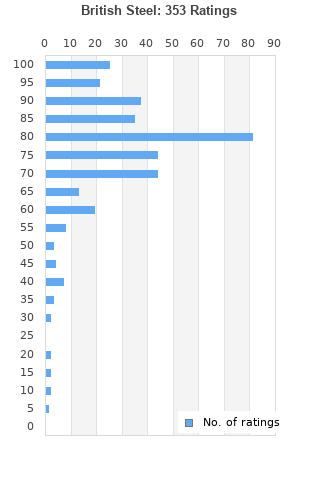 British Steel is ranked 2nd best out of 27 albums by Judas Priest on BestEverAlbums.com.

The best album by Judas Priest is Screaming For Vengeance which is ranked number 1108 in the list of all-time albums with a total rank score of 1,659. 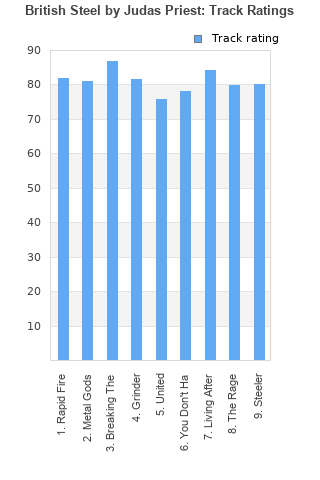 Rating metrics: Outliers can be removed when calculating a mean average to dampen the effects of ratings outside the normal distribution. This figure is provided as the trimmed mean. A high standard deviation can be legitimate, but can sometimes indicate 'gaming' is occurring. Consider a simplified example* of an item receiving ratings of 100, 50, & 0. The mean average rating would be 50. However, ratings of 55, 50 & 45 could also result in the same average. The second average might be more trusted because there is more consensus around a particular rating (a lower deviation).
(*In practice, some albums can have several thousand ratings)
This album is rated in the top 5% of all albums on BestEverAlbums.com. This album has a Bayesian average rating of 77.2/100, a mean average of 76.1/100, and a trimmed mean (excluding outliers) of 77.4/100. The standard deviation for this album is 17.0.

Great record i love the outstanding tracks Breaking the Law and Living After Midnight deserves his place but coul be ranked higher.

A Rock Gem of an album by Judas Priest, not a bad track on here.

A perfectly timed breakout release for Judas Priest. British Steel does have a bit lighter lyrics than some of Priest's earlier releases and a lot of the band's concert staples came with this album.

Key tracks: Living After Midnight, Breaking the Law, Metal Gods and You Don't Have to Be Old to Be Wise

Released in the same year Black Sabbath released Heaven and Hell and Saxon released Wheels of Steel. The metal scene at the time was sizzling with new talent and this album with its iconic timeless cover was timed perfectly. Rob Halford's voice has taken me a while to gravitate to but there is no denying the power that this album delivers. Now that I have the vinyl version I enjoy it much more.

What a year 1980 was. This was one of the best. Maybe Priest's best record. The production was perfect. The guitars sound huge and vicious.

Great album! Every track a winner.

The beginning of metal's breakthrough decade. Iron Maiden, Ace of Spades and British Steel on the same year, and the latter is probably the best of the three.

Your feedback for British Steel