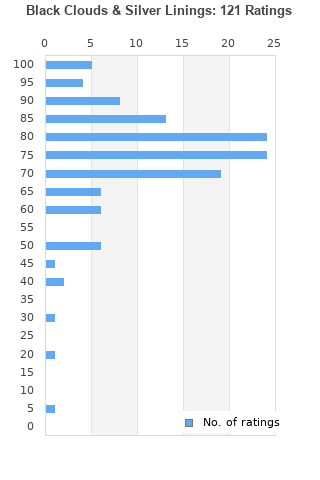 Black Clouds & Silver Linings is ranked 4th best out of 35 albums by Dream Theater on BestEverAlbums.com. 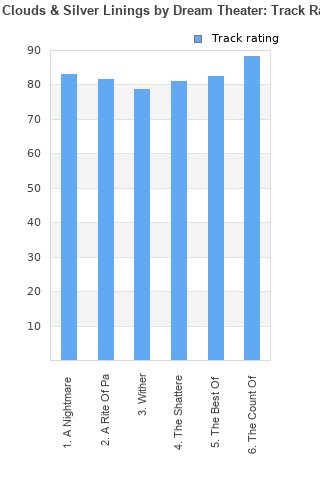 The Count Of Tuscany
Rating: 87 (40 votes)Comments:

Rating metrics: Outliers can be removed when calculating a mean average to dampen the effects of ratings outside the normal distribution. This figure is provided as the trimmed mean. A high standard deviation can be legitimate, but can sometimes indicate 'gaming' is occurring. Consider a simplified example* of an item receiving ratings of 100, 50, & 0. The mean average rating would be 50. However, ratings of 55, 50 & 45 could also result in the same average. The second average might be more trusted because there is more consensus around a particular rating (a lower deviation).
(*In practice, some albums can have several thousand ratings)
This album is rated in the top 13% of all albums on BestEverAlbums.com. This album has a Bayesian average rating of 75.1/100, a mean average of 74.2/100, and a trimmed mean (excluding outliers) of 75.3/100. The standard deviation for this album is 15.5.

Has issues at its halfway point, but it´s strong enough to get past that with one of the best openers and closers. Very strong DT record overall.

Much more than only a good album of Dream Theater. In spite of its length, Black Clouds & Silver Linings never gets boring. Each minute is worth it, 75 minutes of great level and musical pleasure, with A Rite of Passage and The Count of Tuscany as the weightiest and hookiest moments. You will hardly find such a long album keeping so relevant from start to end.

This album seems to rest somewhere between Octavarium and Systematic Chaos. It's more mature than SC but not quite as soft and atmospheric as 8V; it still packs a punch. One thing that stands out on this album are the melodies, especially in songs like A Nightmare to Remember and The Best of Times. Wither is a nice song in the Forsaken and Another Day vein; solid second-song material. The album is book-ended by two of DT's best epics (even though Tuscany is kinda cheesy).