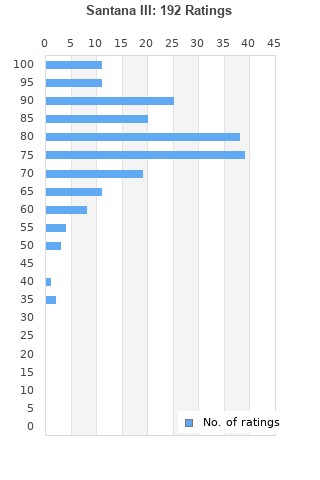 Santana III is ranked 5th best out of 53 albums by Santana on BestEverAlbums.com.

The best album by Santana is Abraxas which is ranked number 510 in the list of all-time albums with a total rank score of 3,729. 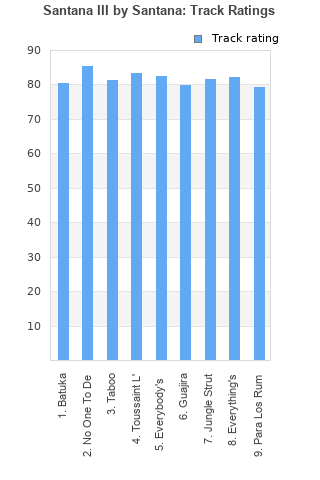 Rating metrics: Outliers can be removed when calculating a mean average to dampen the effects of ratings outside the normal distribution. This figure is provided as the trimmed mean. A high standard deviation can be legitimate, but can sometimes indicate 'gaming' is occurring. Consider a simplified example* of an item receiving ratings of 100, 50, & 0. The mean average rating would be 50. However, ratings of 55, 50 & 45 could also result in the same average. The second average might be more trusted because there is more consensus around a particular rating (a lower deviation).
(*In practice, some albums can have several thousand ratings)
This album is rated in the top 2% of all albums on BestEverAlbums.com. This album has a Bayesian average rating of 78.9/100, a mean average of 78.5/100, and a trimmed mean (excluding outliers) of 79.2/100. The standard deviation for this album is 12.1.

A great album, though a little lacking compared to those that came before and the album directly after

I was given a Santana CD box set of three albums for Christmas some twenty years ago and this album along with Welcome and Santana make up the trio. It has been many years since I have listened to any Santana and to be honest I forgot how good it is. Carlos Santana is without question an amazing guitarist and his style suits a more 'funk' like style. The ever present congas, bongos and cowbells from the percussion corner cement the Santana sound. There is some truly epic guitar soloing on this album.

I think if you gave me 30 seconds of music from one of Santana's first three albums I wouldn't be able to tell which one it was(unless it was one of the two Abraxas hits). Maybe I need to listen more. Still some of the best music ever made.

From start to finish, I think the best collection of Santana songs with the focus on blistering guitar jams , even in the context of Santana's other work, mixed with epic percussion work. It doesn't have a big radio hit like Santana 1 or Abraxas, but I thinks it's overall slightly better than those 2 classics. If you only know their greatest hits, try this album out for further enlightment.

Nothing that stands out like Santana and Abraxas, but solid from start to finish.

Best Track: No One To Depend

I gotta say this is my favorite Santana album

I grew up listening to Santana and Abraxas, and they have both pretty much always been on my mind when listing the best albums made. For some reason I never got around to getting Santana III though, and the first time I heard it was just a year or two ago. From the first time I put it on through all the times I've played it since I know that I grew up missing Santana's best album. The band has more energy than on the previous two outings, which makes the album rock harder. I wish I could have seen this live. Best tracks: Toussaint l'Overture and Everybody's Everything.

Your feedback for Santana III