Songs Of Innocence (studio album) by U2 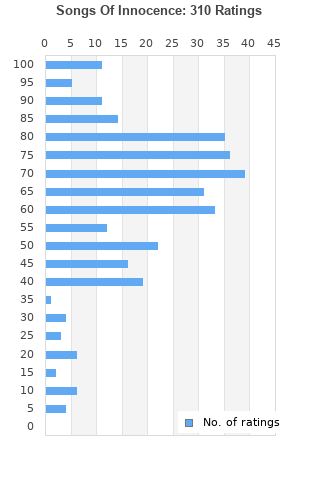 Songs Of Innocence is ranked 12th best out of 31 albums by U2 on BestEverAlbums.com.

The best album by U2 is The Joshua Tree which is ranked number 50 in the list of all-time albums with a total rank score of 25,618. 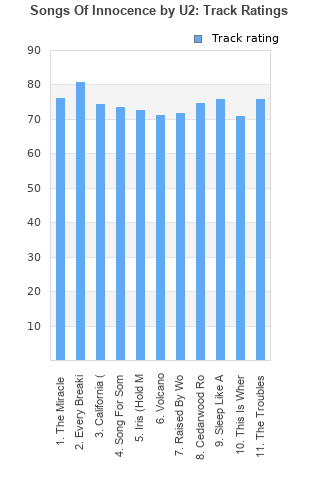 Rating metrics: Outliers can be removed when calculating a mean average to dampen the effects of ratings outside the normal distribution. This figure is provided as the trimmed mean. A high standard deviation can be legitimate, but can sometimes indicate 'gaming' is occurring. Consider a simplified example* of an item receiving ratings of 100, 50, & 0. The mean average rating would be 50. However, ratings of 55, 50 & 45 could also result in the same average. The second average might be more trusted because there is more consensus around a particular rating (a lower deviation).
(*In practice, some albums can have several thousand ratings)
This album has a Bayesian average rating of 63.7/100, a mean average of 63.3/100, and a trimmed mean (excluding outliers) of 63.3/100. The standard deviation for this album is 20.7.

Good album for me it is average but you can hear to this album in a good way. Like the songs and the album cover. Joshua Tree is clear in another league but i give 85 points because its ok.

Much maligned album but it's got some nice moments. Song For Someone is a very nice track. Not a patch on their best albums but not too shabby either.

This album is very short of U2's best album but it has some great rifts and vocals.

Songs Of Experience is the better album by a long way.

Bono again demonstrates what a great vocalist he is. This is actually a top notch album

Songs of innocence is never engulfing or harming, just a mediocre album that is a little overproduced.

It is average album, no really outstanding tracks. The best songs are EVERY BREAKING WAVE,SONG FOR SOMEONE,and THE TROUBLES.

My favorite U2 album. Very especial for me!

Your feedback for Songs Of Innocence