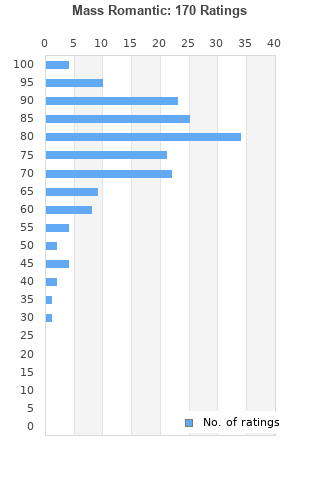 The New Pornographers Mass Romantic used cd
Condition: Acceptable
Time left: 2d 14h 46m 22s
Ships to: Worldwide
$12.20
Go to store
Product prices and availability are accurate as of the date indicated and are subject to change. Any price and availability information displayed on the linked website at the time of purchase will apply to the purchase of this product.  See full search results on eBay

Mass Romantic is ranked 3rd best out of 8 albums by The New Pornographers on BestEverAlbums.com.

The best album by The New Pornographers is Twin Cinema which is ranked number 1572 in the list of all-time albums with a total rank score of 1,081. 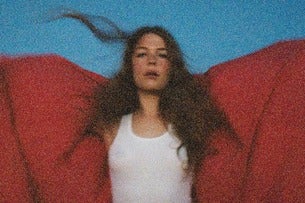 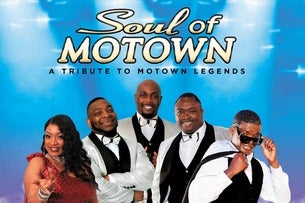 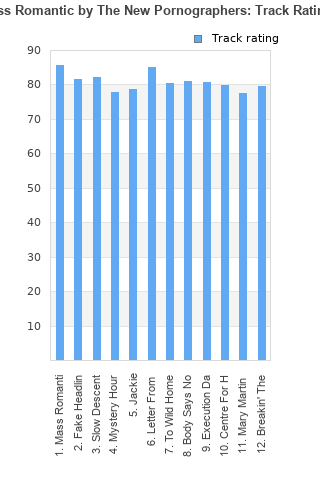 Rating metrics: Outliers can be removed when calculating a mean average to dampen the effects of ratings outside the normal distribution. This figure is provided as the trimmed mean. A high standard deviation can be legitimate, but can sometimes indicate 'gaming' is occurring. Consider a simplified example* of an item receiving ratings of 100, 50, & 0. The mean average rating would be 50. However, ratings of 55, 50 & 45 could also result in the same average. The second average might be more trusted because there is more consensus around a particular rating (a lower deviation).
(*In practice, some albums can have several thousand ratings)
This album is rated in the top 5% of albums on BestEverAlbums.com. This album has a mean average rating of 77.0/100. The trimmed mean (excluding outliers) is 77.3/100. The standard deviation for this album is 13.2.

Having enjoyed ‘ White Out Conditions ‘ in 2017 I went back and listened to this their debut album and yes it’s great. All of The New Pornographers sounds and trademarks are right here at the beginning and I definitely enjoy this album more than ‘ White Out ‘ . There’s 5 more NP albums to discover and I’ll definately be checking them out

For a band that has been relatively ignored by this website, they have a really super strong early discography. And it's not as if NP is obscure. They are pretty well known. Nevertheless, Mass Romantic is a beautiful album.

Quite the opening statement. Brilliant band.

The New Pornographers splashed on the scene, creating a Canadian indie-pop super-group. We were terrified it was temporary, as Neko Case hadn't committed full time. Why so scared? Because this is catchy, intelligent and creative pop-rock. It would've been shameful to miss out on more.

"mass romantic" is one catchy mutha of indie pop. Entire songs sound like one long catchy chorus with tongue-in-cheek lyrics, like the title track headed by the sultry neko case belting out lines like "Now this romantic duel is into the streets, / bon appetit, you've eaten me alive... " Many songs sound like they have layers-upon-layers of separate-but-equal catchy choruses, like "the slow descent into alcoholism" following repeated catchy verse of "my, my, my, my slow descent into alcoholism / It went something like this song (x3)" with "Salvation holdout central(x3)" (with neko backing) packing it with more fire later (making alcoholism sound like a BLAST). i like dan bejar's dark sass and opening line of "jackie" ("Jackie you yourself said it best when you said: There's been a break in the continuum") and near-closing line ("What's a version of the world without the will to despise it"). But it's the upbeat numbers dat drop da bomb. "letter from an occupant" (another with layered choruses) has a lot of energy, delivered by neko, with some upbeat drums & synths with rhythm, singing "You told me I could order the moon, babe / Just as long as as I shoot what I want." and really letting go throughout ending with some low-key mangled guitar. (AC & Bejar are good'n'all, but my new p*rn highlight's always neko.) i love the ending harmonies of "to wild homes" (& its multiple choruses). More multiple choruses in "the centre for holy wars" eventually trading a chorus of "Exactly where we are, at the center for holy wars, / I hope it never comes down again." with a repeated "Hope grows greener than grass stains.". (This fun just HAS to be heard instead of read to be believed.) The only misstep is "execution day" which lacks replete catchiness of the other songs and has a "stop/start" tempo contrary to the smooth near-constant energy of the rest of mass romantic. Fine debut.

Your feedback for Mass Romantic