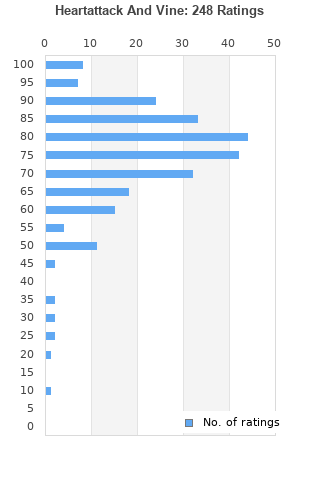 Tom Waits Heartattack and Vine Remastered Digipak CD NEW
Condition: Brand New
Time left: 12h 37m 13s
Ships to: Worldwide
$28.88
Go to store
Product prices and availability are accurate as of the date indicated and are subject to change. Any price and availability information displayed on the linked website at the time of purchase will apply to the purchase of this product.  See full search results on eBay

Heartattack And Vine is ranked 9th best out of 27 albums by Tom Waits on BestEverAlbums.com.

The best album by Tom Waits is Rain Dogs which is ranked number 100 in the list of all-time albums with a total rank score of 16,095. 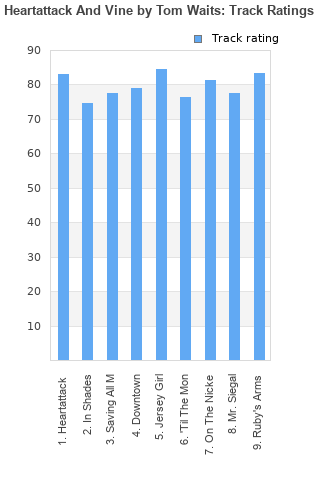 Rating metrics: Outliers can be removed when calculating a mean average to dampen the effects of ratings outside the normal distribution. This figure is provided as the trimmed mean. A high standard deviation can be legitimate, but can sometimes indicate 'gaming' is occurring. Consider a simplified example* of an item receiving ratings of 100, 50, & 0. The mean average rating would be 50. However, ratings of 55, 50 & 45 could also result in the same average. The second average might be more trusted because there is more consensus around a particular rating (a lower deviation).
(*In practice, some albums can have several thousand ratings)
This album is rated in the top 10% of all albums on BestEverAlbums.com. This album has a Bayesian average rating of 75.6/100, a mean average of 74.7/100, and a trimmed mean (excluding outliers) of 75.7/100. The standard deviation for this album is 15.0.

Heartattack and vine, is half, a dirty rock album, and half, beautiful piano ballads. Waits growls and hollers on the opening title track, a great bluesy cut. Waits also goes for that gritty rock sound on the excellent, downtown, the percussion heavy, til' the money runs out, and the penultimate track, Mr. Siegel. This record also includes, arguably Waits' most famous song, Jersey girl, an absolutely fantastic track, and a song which Bruce Springsteen faithfully covered on his, live 1975-1985 box set, on which he also added a verse of his own. Off the ballads, saving all my love for you, is good, but, on the nickel, and, Ruby's arms, are stunning, two more genuine Waits classics. The only dud on the album is the pointless live instrumental, in shades. It's surprising that the track is on the album at all, but the fact that it's the second track is, well, just inexplicable. All in all, it's another essential Tom Waits record.

Not the Waits I was waiting for.
Some of the tracks sound the same

sounds a bit like the famous bruce springsteen record: tonsillitis, whiskey and me.

Less piano and another slight step toward the new sound that brought his two most heralded albums. Seventh straight high quality album and his best since the debut.

Your feedback for Heartattack And Vine