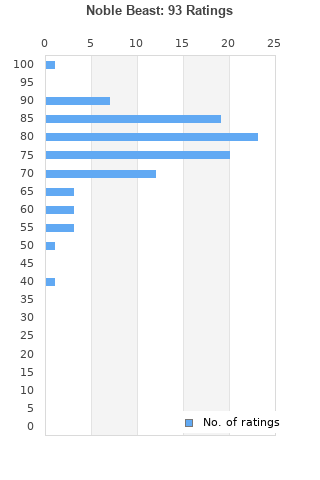 Noble Beast
Condition: Acceptable
Time left: 3d 19h 6m 26s
Ships to: Worldwide
$4.99
Go to store
Product prices and availability are accurate as of the date indicated and are subject to change. Any price and availability information displayed on the linked website at the time of purchase will apply to the purchase of this product.  See full search results on eBay

Noble Beast is ranked 4th best out of 19 albums by Andrew Bird on BestEverAlbums.com.

The best album by Andrew Bird is The Mysterious Production Of Eggs which is ranked number 1685 in the list of all-time albums with a total rank score of 1,025. 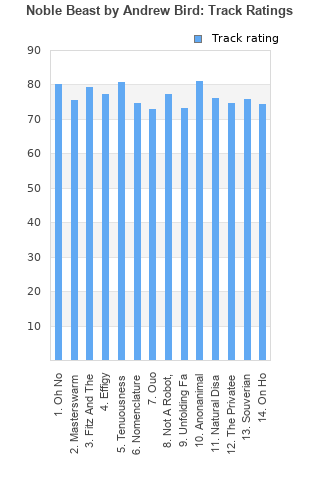 Rating metrics: Outliers can be removed when calculating a mean average to dampen the effects of ratings outside the normal distribution. This figure is provided as the trimmed mean. A high standard deviation can be legitimate, but can sometimes indicate 'gaming' is occurring. Consider a simplified example* of an item receiving ratings of 100, 50, & 0. The mean average rating would be 50. However, ratings of 55, 50 & 45 could also result in the same average. The second average might be more trusted because there is more consensus around a particular rating (a lower deviation).
(*In practice, some albums can have several thousand ratings)
This album is rated in the top 5% of all albums on BestEverAlbums.com. This album has a Bayesian average rating of 77.2/100, a mean average of 77.2/100, and a trimmed mean (excluding outliers) of 77.6/100. The standard deviation for this album is 9.6.

His best album by far. If the whistling in Oh No doesn't grab you right away, goddamn.

This album is at times both brilliant and frustrating. Oh No, Fitz and Dizzyspells and Effigy are remarkably pretty and melodic songs. Masterswarm and Souverian are lengthier tracks, with interesting structures and moments of smart complexity. On the other side of things, the album is held back by sections that fall into bland faceless folky-indieness, or rely to much on witty wordplay instead of Andrew Bird's compositional talent.

Just as solid as his previous album. It might as well be a sequel. Consistent-but-not-great, so it's probable this will be overlooked by more ambitious albums later on. He has a way with twisting english idioms apparent in track names like "anoanimal", "souverian" and "nomenclature". He continues to be a clever songwriter.

Your feedback for Noble Beast