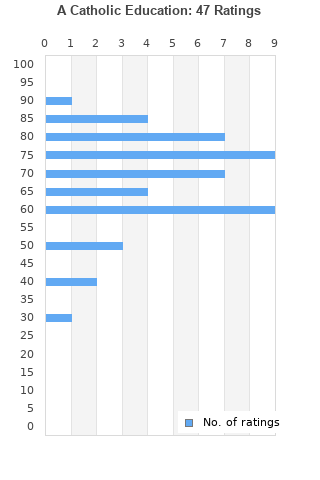 Teenage fanclub-A catholic education (UK IMPORT) Vinyl / 12" Album NEW
Condition: New
Time left: 4d 2h 26m 48s
Ships to: Worldwide
$25.38
Go to store
Product prices and availability are accurate as of the date indicated and are subject to change. Any price and availability information displayed on the linked website at the time of purchase will apply to the purchase of this product.  See full search results on eBay

A Catholic Education is ranked 5th best out of 12 albums by Teenage Fanclub on BestEverAlbums.com.

The best album by Teenage Fanclub is Bandwagonesque which is ranked number 1193 in the list of all-time albums with a total rank score of 1,531. 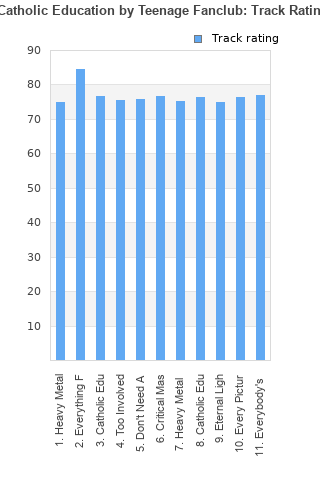 Rating metrics: Outliers can be removed when calculating a mean average to dampen the effects of ratings outside the normal distribution. This figure is provided as the trimmed mean. A high standard deviation can be legitimate, but can sometimes indicate 'gaming' is occurring. Consider a simplified example* of an item receiving ratings of 100, 50, & 0. The mean average rating would be 50. However, ratings of 55, 50 & 45 could also result in the same average. The second average might be more trusted because there is more consensus around a particular rating (a lower deviation).
(*In practice, some albums can have several thousand ratings)
This album has a Bayesian average rating of 71.8/100, a mean average of 70.4/100, and a trimmed mean (excluding outliers) of 71.5/100. The standard deviation for this album is 12.4.

Saw fanclub again a few days back. Everything flows IS the best alt rock song ever. I have a radio one session version of it on some possibly now decomposed tape which is even better. Neil would be proud.

Another album that I missed at the time though I've been a fan since bandwagonesque and known since then that, as littlem said, everything flows is wonderful. I saw them again last night and I thought maybe this song is greatest alt rock track ever. And maybe I should listen to this album.

Doesn't appear to be much love for this album which is a shame. Personally I love it which contains one of my favourite songs ever in 'Everything Flows'. Critical Mass amongst others is another classic. I guess this album is a bit sloppy and unfocussed but I like that.

Your feedback for A Catholic Education