Fly On The Wall (studio album) by AC/DC 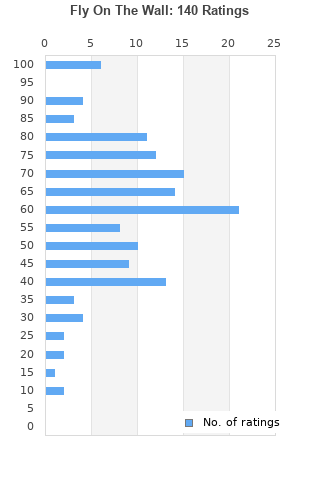 AC/DC ‎– Fly On The Wall Vinyl LP Atlantic 781 263-1 A2/B3 Alsdorf Press EX+/EX
Condition: Used
Time left: 3h 18m 20s
Ships to: Worldwide
£15.00
Go to store
Product prices and availability are accurate as of the date indicated and are subject to change. Any price and availability information displayed on the linked website at the time of purchase will apply to the purchase of this product.  See full search results on eBay

Fly On The Wall is ranked 17th best out of 25 albums by AC/DC on BestEverAlbums.com.

The best album by AC/DC is Back In Black which is ranked number 133 in the list of all-time albums with a total rank score of 13,290. 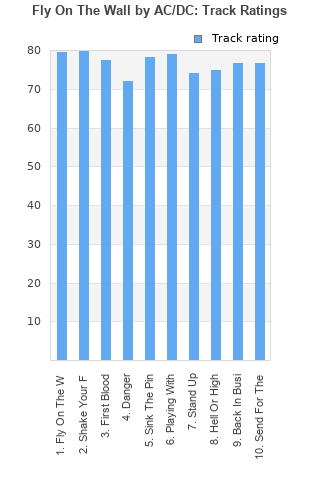 Fly On The Wall rankings

Fly On The Wall collection

Fly On The Wall ratings

Rating metrics: Outliers can be removed when calculating a mean average to dampen the effects of ratings outside the normal distribution. This figure is provided as the trimmed mean. A high standard deviation can be legitimate, but can sometimes indicate 'gaming' is occurring. Consider a simplified example* of an item receiving ratings of 100, 50, & 0. The mean average rating would be 50. However, ratings of 55, 50 & 45 could also result in the same average. The second average might be more trusted because there is more consensus around a particular rating (a lower deviation).
(*In practice, some albums can have several thousand ratings)
This album has a Bayesian average rating of 61.1/100, a mean average of 60.1/100, and a trimmed mean (excluding outliers) of 60.1/100. The standard deviation for this album is 19.9.

Fly On The Wall favourites

Fly On The Wall comments

Very sad. This album is so formulaic it could of been written by a class of 12 year olds doing a project on song structure; every song is the same. Major decline on everything that came before. 'Sink the Pink' is the only saving grace. It's an album that if you're in the mood for AC/DC, you'll choose something else. This will live at the bottom of the pile.

ACDC's most underrated post Back in Black album, I believe. Looking aside from the production, there are some damn good tracks on here. That being said, they aren't all great, but most of them are. Production does hold it back, though...

This is NOT AC/DC's worst album. (blow up your video is) This album is very underrated. The only bad thing is the production. It's almost impossible to understand what Brian Johnson is saying. Other then that the album is a great hard rocking album that is very underrated.

the cover says it all.

Tough songs mixed with a couple of bad ones and a murky production. Not a bad album, it could've been better

shake your foundations is the best song.

This shouldn't be on a site discussing the greatest albums ever made. One strong single, then mostly filler.

Your feedback for Fly On The Wall