There are 0 comments for this chart from BestEverAlbums.com members and Top 10 Music Albums of 2015 has an average rating of 86 out of 100 (from 1 vote). Please log in or register to leave a comment or assign a rating.

View the complete list of 45,000 charts on BestEverAlbums.com from The Charts page.

Australia's own Kevin Parker is one of modern music's preeminent figures and most forward-thinking creators. His creativity and artistic foresight has helped partially reinvigorate a stagnant rock industry which has seen itself surpassed by hip-hop in recent years. He burst on the scene with 2010's Innerspeaker, a trippy, rainbow-colored interpretation of contemporary psychedelia. His layered, consummate sonic textures earned him widespread acclaim. He then upped the ante on 2012's Lonerism, a richer, more refined collection of the motifs found on Innerspeaker. His vocals channeled John Lennon on tracks like Sun's Coming Up and his guitar-propelled breakdowns were awe-inspiring on tracks like Keep on Lying. Lonerism was even more heavily lauded and alternative rock was ready to crown its newest talisman. Then Kevin did what every great artist does. He made a hard left turn. 2015 marked the arrival of his third studio album, Currents, a record bubbling with pop textures, emphasis on airy synth work and clearer production. He effortlessly repackaged his sound and reinvented his approach as an artist and the endgame resulted in his most luscious, vibrant record to date. Currents is a synth-pop symphony which made fellow genre mates look like neophytes noodling around with Casio keyboards in 6th grade music class.

The record begins emphatically with the anthemic, Let It Happen. The track buzzes into focus as synth walls hiss while fuzzed out beats linger behind. Parker concludes, "All this running around, trying to cover my shadow; an ocean growing inside, all the others seem shallow." The track reaches a midpoint climax where it undergoes stylized skips as string-like synth tones swell concurrently. Let It Happen is just as springy as it is languid, flowing out without any resistance, avoiding any sonic intrusion. It's a shot to the arm that kicks the album into gear and remains one of Parker's finest achievements. Brief interlude, Nangs, acts as a quasi-comedown but while also turning up the thematic dissatisfaction as Parker croons (faintly), "But is there something more than that?" The album resuscitates with third track, The Moment. The song carries more girth as the bass takes a more noticeable role in the fray. It's also marked by an uptick in the quality of its poetry. Parker accepts, "In the end, it's stronger than I know how to be and I can't just spend my whole lifetime wondering; I fell in love with the sound of my heels on the wooden floor; I don't want our footsteps to be silent anymore." The track moves at a breakneck pace despite lasting over four minutes. Another highlight of danceable vitality delivered with punchy intensity. Currents' second masterpiece is unveiled in the form of fourth track, Yes I'm Changing. The song unfurls with spectral delicacy, creating the illusion of lying face up on a raft, drifting down a boundless river. The percussion structure here is caressing but never overbearing and it galvanizes the song with a steady heartbeat. Parker's maturation is evident on the track as he declares, "And I can't always hide away, curse indulgence and despise the fame; there's a world out there and it's calling my name and it's calling yours too." Parker has shed the shackles of his pre-disposition to avoid incorporating new musical ideas and has opted to grow as an artist and a person. He's inviting you to grow with him. Yes I'm Changing then majestically twinkles out of your reach. A beautiful meditation.

Fifth track, Eventually, journals a deteriorating relationship, characterized by peaks and valleys, both in metaphor and musicality. Eventually launches with authoritative guitar thwacks that contrast the more despondent moments of sound where Parker elegizes, "Wish I could turn you back into a stranger; 'cause if I was never in your life, you wouldn't have to change it." The back half is markedly wondrous as a fizzing synth alternates between both audio channels signifying a situation spiraling out of control. Parker's creative visions have never been more realized and clearly communicated. Sixth track, Gossip, splits the album in two as it transports the listener through osmosis with an aqueous production style. Shortly after, The Less I Know the Better gives us the most clearly-defined pop song on the record. Its tempo is consistent, carrying DNA from The Moment in terms of its percussive principles. Failing romantic relations once again take center stage as Parker laments his inclusion within a love triangle. He details, "I was doing fine without ya till I saw your face, now I can't erase; giving in to all his bullshit, is this what you want; is this who you are?" The song is reinforced by a boisterous guitar riff that forms a rib cage in which to encase the emotional synth chimes. It's both melancholic and madcap in equal measure. Past Life represents the only outright miss on the album, incorporating a distorted spoken word piece awash with Parker's epic, yet marooned synth explosions. Past Life seems more like an unpolished proposition rather than a finished track. It slightly disturbs the flow of the LP but what's shaky for Kevin Parker is another artist's treasure. Disciples starts as a short burst of lo-fi funk, a concept that calls back to the guitar-driven work of Innerspeaker. The song then clears, carving a path for Parker's crystalline vocals. The track is surely a microcosm for the artistic motivations presented on the album.

Ten spot, Cause I'm a Man, is a dissertation that outlines the deficiencies that plague the male sex. Kevin provides his strongest vocal outing on the track, howling apologetically as he slices through his electric ozone. He croons, "Cause I'm a man, woman; don't always think before I do; cause I'm a man, woman; that's the only answer I've got for you." It stands as one of the most implicit moments of humor on Currents. Reality in Motion follows and reclaims your attention harboring all things zealous. It's another example of Parker's gravitational pull to the percussive on the LP as an infectious drum texture spirals throughout. Love/Paranoia is another doleful anecdote à la Eventually. Conclusively, Parker pledges a return to form instead of flying the white flag as he did on Eventually. The second half of the track hovers with an icy synth backing reminiscent of early New Order. The swan song, New Person, Same Old Mistakes, is a bonafide belter as chest felt bass swaggers proudly. Parker seems to uncork the might of his arsenal on the track, as it represents the most ambitious cut since Let It Happen. Kevin celebrates, "Finally taking flight; I know you don't think it's right; I know that you think it's fake; maybe fake's what I like." At the finale, a synth bridge seems to progress inversely before the Aussie puts an end to it with the bombastic refrain. It's a sublime way to conclude the cosmic record.

With Currents, Kevin Parker didn't just craft top notch pop music, he rearranged its pieces in order to shape something superior altogether. Currents represents pop's future and all the things the genre could be if properly upheaved. The fledgeling genius knows that the only way to create change is from within, and he's certainly set a precedent with his third LP by looking within himself and pushing multiple boundaries. By transversing electronic soundscapes, turning over new leaves while reflecting on old ones, Parker has emphatically expanded his reach and influence. His much-awaited follow up, 2020's The Slow Rush is another feather in his cap but 2015's Currents is his chef-d'oeuvre. It's an LP that assuredly livens up any college party while simultaneously prompting its guests to contemplate their ever-murky futures.

"Man, I know that it's hard to digest,
But maybe your story ain't so different from the rest,
And I know it seems wrong to accept
But you've got your demons, and she's got her regrets."

1
To Pimp A Butterfly

1
I Love You, Honeybear

Don't agree with this chart? Create your own from the My Charts page!

Not a member? Registering is quick, easy and FREE!

Register now - it only takes a moment!

Other year charts (from the 2010s) by DriftingOrpheus 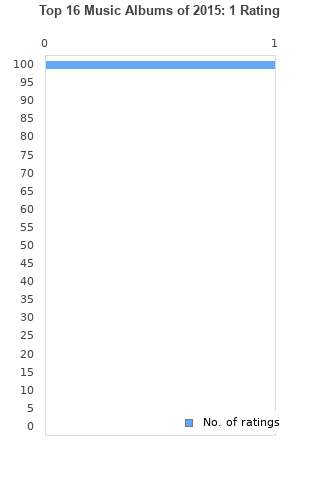 N.B. The average rating for this chart will not be reliable as it has been rated very few times.

Showing all 1 ratings for this chart.

Let us know what you think of this chart by adding a comment or assigning a rating below!
Log in or register to assign a rating or leave a comment for this chart.
If you enjoy our site, please consider supporting us by sparing a few seconds to disable your ad blocker.