Echolalia (studio album) by Something For Kate 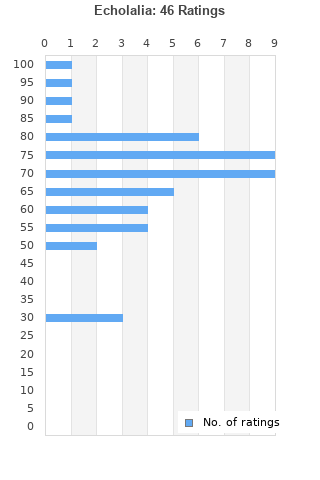 Echolalia is ranked as the best album by Something For Kate. 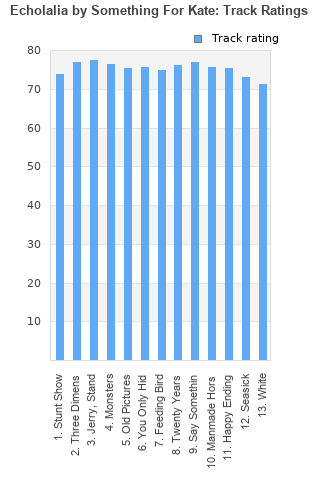 0
7.
Feeding Birds And Hoping For Something In Return
Rating: 75 (5 votes)Comments:

Rating metrics: Outliers can be removed when calculating a mean average to dampen the effects of ratings outside the normal distribution. This figure is provided as the trimmed mean. A high standard deviation can be legitimate, but can sometimes indicate 'gaming' is occurring. Consider a simplified example* of an item receiving ratings of 100, 50, & 0. The mean average rating would be 50. However, ratings of 55, 50 & 45 could also result in the same average. The second average might be more trusted because there is more consensus around a particular rating (a lower deviation).
(*In practice, some albums can have several thousand ratings)
This album has a Bayesian average rating of 69.4/100, a mean average of 68.6/100, and a trimmed mean (excluding outliers) of 68.6/100. The standard deviation for this album is 14.6.

Like many fans this album was my SFK entry point with the track “Monsters” unlocking the band as a whole. Personally I prefer their 2003 follow up ‘Official Fiction’ but it really is splitting hairs as they are both great albums

And to the previous poster Gooz from 2014 making the Creed comparison, LOL , not even close my friend

Cheesy, pretentious lyrics and awful guitar work, alongside pretty annoying harmonies and melodic vocals that add up to a boring ass album.

Something For Kate will be remembered if only for 'Monsters' from this album. But the album has a lot to offer and was one album I listened to constantly after its intial release. My all-time favourite Aus album.

Your feedback for Echolalia