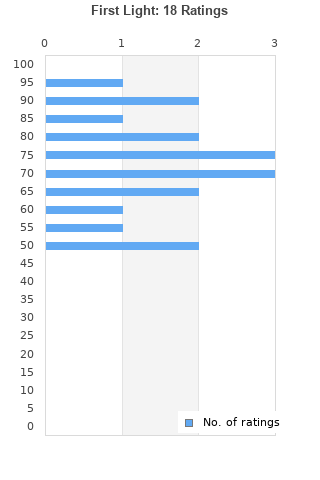 FREDDIE HUBBARD First Light CTI LP VG++ canada gatefold *
Condition: Used
Time left: 2d 9h 31m 26s
Ships to: Worldwide
$8.00
Go to store
Product prices and availability are accurate as of the date indicated and are subject to change. Any price and availability information displayed on the linked website at the time of purchase will apply to the purchase of this product.  See full search results on eBay

First Light is ranked 3rd best out of 37 albums by Freddie Hubbard on BestEverAlbums.com.

The best album by Freddie Hubbard is Red Clay which is ranked number 5758 in the list of all-time albums with a total rank score of 224. 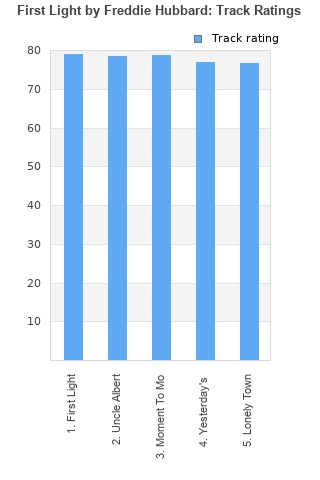 Rating metrics: Outliers can be removed when calculating a mean average to dampen the effects of ratings outside the normal distribution. This figure is provided as the trimmed mean. A high standard deviation can be legitimate, but can sometimes indicate 'gaming' is occurring. Consider a simplified example* of an item receiving ratings of 100, 50, & 0. The mean average rating would be 50. However, ratings of 55, 50 & 45 could also result in the same average. The second average might be more trusted because there is more consensus around a particular rating (a lower deviation).
(*In practice, some albums can have several thousand ratings)
This album has a Bayesian average rating of 73.1/100, a mean average of 73.0/100, and a trimmed mean (excluding outliers) of 73.0/100. The standard deviation for this album is 12.8.

The CTI label’s notorious for adding string and brass arrangements to their albums. This is an above-average example, but it teeters a little too close to muzak for my taste. I vastly prefer Hubbard’s previous CTI record, Straight Life. Fantastic jazz-funk that doesn’t stint on the jazz. Has all the great jazz musicians on here plus Joe Henderson.

What happens when Freddie Hubbard expands his musical vision and enlists the likes of George Benson and Jack DeJohnette to bring it to reality? This masterpiece, that's what. This is a top-flight jazz album in every regard which covers and blends a variety of jazz genres into a seamless wonder.

Your feedback for First Light