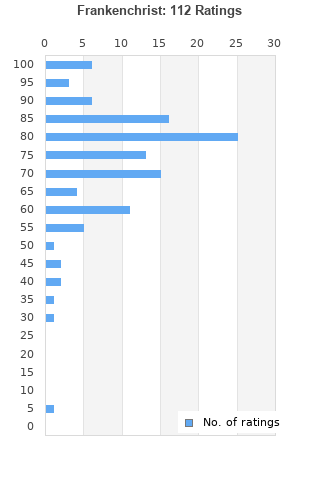 Frankenchrist is ranked 3rd best out of 8 albums by Dead Kennedys on BestEverAlbums.com.

The best album by Dead Kennedys is Fresh Fruit For Rotting Vegetables which is ranked number 346 in the list of all-time albums with a total rank score of 5,502. 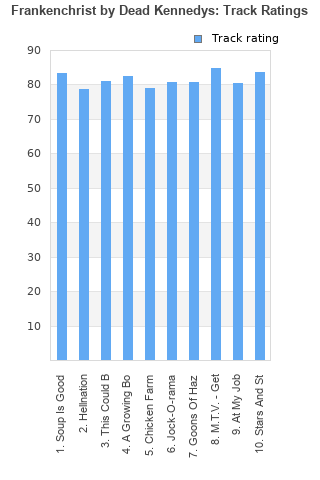 Rating metrics: Outliers can be removed when calculating a mean average to dampen the effects of ratings outside the normal distribution. This figure is provided as the trimmed mean. A high standard deviation can be legitimate, but can sometimes indicate 'gaming' is occurring. Consider a simplified example* of an item receiving ratings of 100, 50, & 0. The mean average rating would be 50. However, ratings of 55, 50 & 45 could also result in the same average. The second average might be more trusted because there is more consensus around a particular rating (a lower deviation).
(*In practice, some albums can have several thousand ratings)
This album is rated in the top 13% of all albums on BestEverAlbums.com. This album has a Bayesian average rating of 75.2/100, a mean average of 74.8/100, and a trimmed mean (excluding outliers) of 75.4/100. The standard deviation for this album is 15.5.

A lot slower paced than all there other albums. This one took a few listens before it gelled but it's the Dead Kennedys man. Everything they've put out surpasses almost all other punk. As always lyrically brilliant. They are the template of reality. 'MTV Get off the air'; hilarious yet so true.

Everything that made the first couple albums great is still here, but in smaller amounts. The surf rock guitars are dialed back, and the songs feel flatter and less dynamic. The band's subjects matter had always felt more vital than a lot of hardcore punk, but with lots of topics already covered they fall back on subjects more typical of misanthropic punk, like rallying against rednecks, football violence, and MTV. The latter two aren't aren't particularly bad targets, but the first feels over exaggerated and the second was done much better on "Pull My Strings," which was performed live in front of actual music industry heads. The last couple songs show some of the adventurousness from their earlier stuff, but it's not enough to make this album as essential as the first two.

Good album. Nothing bad, but nothing great either.

The songs are powerful and well-constructed. It's just not as memorable as Fresh Fruit, imo, but it's excellent.

DK leaves behind the hardcore/surf punk sound here in favour of something that is almost experimental hard rock. No two songs sound alike, and the musical talent of the band is never more evident.It would have been interesting to see what would have resulted had they continued in this direction.

it tends to be mannerist

Okay, when I first got this I would only ever listen to Soup Is Good Food. But as the months go by each song has opened itself up to me (apart from Goons Of Hazard). And this is a hugely diverse album indeed! This Could Be Anywhere proves Jello as a sheer talented songwriter. A different type of shock than the ones the group gave on their debut. Chicken Farm is another song you might want to check the lyrics to. Brilliant guitar riff in that song much like Moon Over Marin. Jock-O-Rama is hilarious, great chorus! MTV get off the air is fantastic! I like how that seems to be many songs in one. At My Job is a great pitstop before the final track Stars and Stripes of Corruption which is the reason you should have this album on your chart ;)