The Unseen (studio album) by Quasimoto 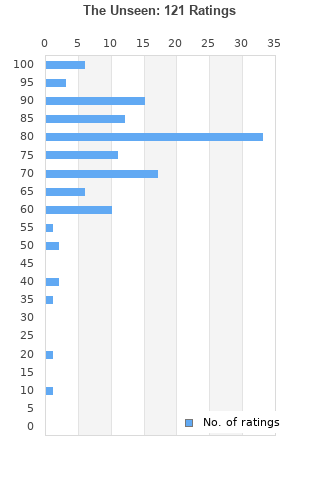 The Unseen is ranked as the best album by Quasimoto. 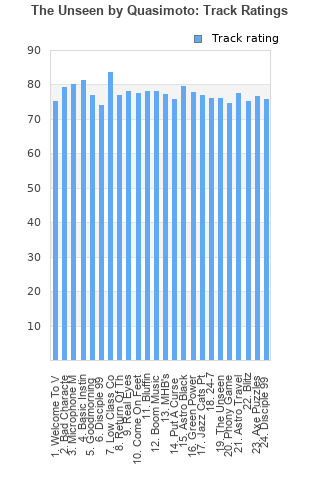 Rating metrics: Outliers can be removed when calculating a mean average to dampen the effects of ratings outside the normal distribution. This figure is provided as the trimmed mean. A high standard deviation can be legitimate, but can sometimes indicate 'gaming' is occurring. Consider a simplified example* of an item receiving ratings of 100, 50, & 0. The mean average rating would be 50. However, ratings of 55, 50 & 45 could also result in the same average. The second average might be more trusted because there is more consensus around a particular rating (a lower deviation).
(*In practice, some albums can have several thousand ratings)
This album is rated in the top 4% of all albums on BestEverAlbums.com. This album has a Bayesian average rating of 77.1/100, a mean average of 76.4/100, and a trimmed mean (excluding outliers) of 77.5/100. The standard deviation for this album is 14.8.

Quasimoto - The Unseen is Madvillainy before Madvillainy and of course I mean that as a huge compliment. The same cartoonish, surreal atmosphere that we all got to know and love. As we see right from the get go in Bad Character Quasimoto is also viewed as a villain ("Guess who's the new bad character in town?", "I'm labeled as a bad character No matter what I do") so there's even a foreshadowing of what's about to follow. He goes for many short tracks (he fits 24 of them in less than 64 minutes) with smooth transitions from each one to the next, so it feels more like a very big song - that's good for the most part, as you get lost in it, though there were a couple of instances where it felt monotonous, nothing too serious. Despite the futuristic vibes, the album has also a jazzy background, so it combines the best of both worlds. His voice is ideal for this kind of musical environment. Not only isn't it annoying, it actually elevates the whole thing, maybe this explains the decision to keep the guests to a minimum , otherwise there would a danger of breaking the momentum - though on the other hand you could argue that some variety would help, as I already mentioned above. The lyrics, well, I don't know to be honest. It's one of those albums where you can't afford to pay attention to the lyrics, what's happening sound-wise is so captivating you don't wanna miss a thing (the funny thing is last night I was contemplating between listening to this or going to sleep, as I was somewhat tired and didn't know if I could listen to an hour long album and I ended up listening to it twice in a row). Hip hop usually does need lyrics more than most genres, but this is far from a typical hip hop album. Picking highlights is no easy task, I'm gonna say Real Eyes -the stuff of dreams, really-, but I can easily imagine the beat of Disciple 99 Pt. 0 being my morning alarm.

Abstract, trippy and surreal. It definitely has that weird vibe from which is Madvillainy known, but for me it's too monotonous at some moments.

Quasimoto and Madlib's rapping are definitely a bit of an acquired taste, but if you first focus on the vintage production and appreciate Madlib's beats, the album will grow on you.

Madlib is a great rapper with a killing flow. before Madvillainy he started Quasimoto with this master piece

Your feedback for The Unseen