Love You (album) by The Beach Boys 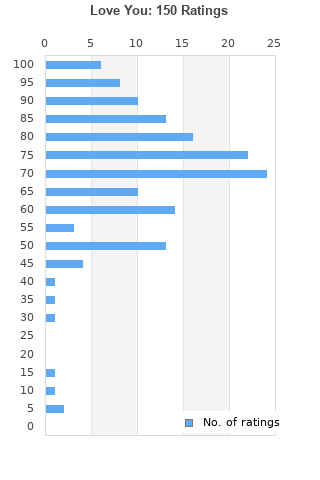 Love You is ranked 12th best out of 58 albums by The Beach Boys on BestEverAlbums.com.

The best album by The Beach Boys is Pet Sounds which is ranked number 13 in the list of all-time albums with a total rank score of 58,993. 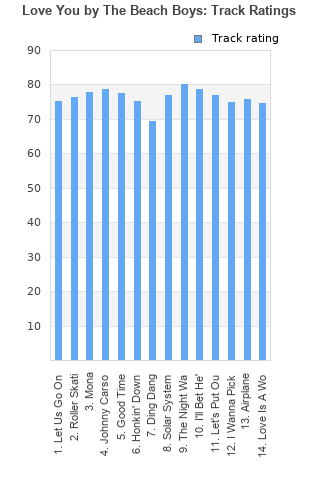 Outliers can be removed when calculating a mean average to dampen the effects of ratings outside the normal distribution. This figure is provided as the trimmed mean. A high standard deviation can be legitimate, but can sometimes indicate 'gaming' is occurring. Consider a simplified example* of an item receiving ratings of 100, 50, & 0. The mean average rating would be 50. However, ratings of 55, 50 & 45 could also result in the same average. The second average might be more trusted because there is more consensus around a particular rating (a lower deviation).
(*In practice, some albums can have several thousand ratings)
This album has a mean average rating of 72.0/100. The trimmed mean (excluding outliers) is 73.5/100. The standard deviation for this album is 17.7.

Many of the tracks sounded rather dated to me (even considering for 1977), especially some of the lyrics being quite cringeworthy. Maybe it's just me, but these considerations meant I found it hard to rate many tracks highly. Though Stand-out tunes I thought were "I'll bet he's nice", "The night was so Young", "Good times". A shame "Ding dang" was so short. Vocal harmonies in many of the songs are sublime, but I can't rate as great songs just on that, sorry BB fans

A forward-thinking pop album for its time. The 14-track, psychedelic exploration holds up as one of the groups' best records for its zaniness

The drop in quality of songwriting from after Surf's Up is really sad.

The follow up to the disappointing 15 big ones. The good thing about this album is that it at least has focus, and it has a musical identity. It's a quirky album, possibly the band's most unbeach boys record of their career. It starts interestingly with, let us go on this way, and you're immediately aware that this a different kind of beach boys album. The synthesizer is king here. Still, it's full of sweet moments, good time is very enjoyable, and honkin' down the highway is fun. Another thing you notice is how shot Brian's voice is in places. Man, it's gone on some songs. The album, also has some very funny momentd in songs like, Johnny Carson, and, solar system, but in truth by the time you get about half way through the album though, the novelty of the songs starts to wear off a bit. The promise of the album was better than it's delivery, but at least it sounds like Brian's actually trying on this album, just not always successful. Quirky fun though.

Their most underrated, this was their last great LP for 35 years. Basically a Brian solo album, much like Pet Sounds and Friends.

After the disappointing and pretty hyped 1976 album "15 Big Ones" the Beach Boys were already out the next year with a new album, "Love You". Brian Wilson had made his comeback with 15 Big Ones ", but it was obvious that his inspiration, both as a producer and songwriter was not what it used to be. Moreover his vocals changed so much that they were hardly recognizable.

On "Love You" Brian Wilson makes a much stronger impression. There are generally more good songs than its predecessor, which was largely dominated by cover versions.

Without much hesitation I would count for at least half of the disc as great and successful. Brian has written all the songs, a couple with help from either Mike Love or Al Jardine.

These two songs ensures a good start to the album. The next two "Mona" and "Johnny Carson", are not among my favorites, but is not without charm either.

A highlight is "Good Time", sung by Brian Wilson. The song was actually recorded back in 1972 when Brian's vocals still had his original strength and tone. Brian also takes the lead vocal on "Solar System" and the change in his voice is significant. It seems, however, stronger than on "15 Big Ones" and the track is one of the album's most complex. Even better is "The Night was so Young", a fine ballad with lead vocals by Carl Wilson.

Very catchy is "I bet he's nice," sung by the three Wilson brothers - another highlight. I've never been a big fan of duets, and Brian's and his wife Marilyn's efforts on "Let's Put Our Hearts Together", can in no way change my mind on this. Dennis Wilson sings the ambiguous "I Wanna Pick You Up" - helped underways by Brian. A very sweet song. "Airplane" has a lightness that makes you think back to the golden years in the late 1960s. Fine lead vocals of Mike Love.

All in all one of the most successful post-Holland albums - perhaps the last that would deserve classic status.

You just need to let it grow on you. I bought the CD that's paired with "15 Big Ones" and the first many times I listened to them, I found "15 Big Ones" way more enjoyable and as you describe it, "Love You" was kinda average. Then suddenly, as with many albums, all songs clicked with me. Beneath the surface of all the silliness, there's actually a deep personality and melancholy (it's almost entirely written by Brian Wilson, most notably the lyrics), especially "The Night Was So Young" is a sad song. A band that were struggling so hard these times and for one moment got it together. It's brilliant, currently my favourite Beach Boys album and one of the 10 greatest albums ever!

Really enjoyed 6 and 7. Peter Buck from R.E.M. said this was his favorite Beach Boys album, which I was a bit surprised at... it does have some more experimental moments, but I guess I was expecting more and got kinda average.

Overwhelmingly enjoyable! Silly and not too deep, but it's completely impossible to resist this joyful ride.

Your feedback for Love You