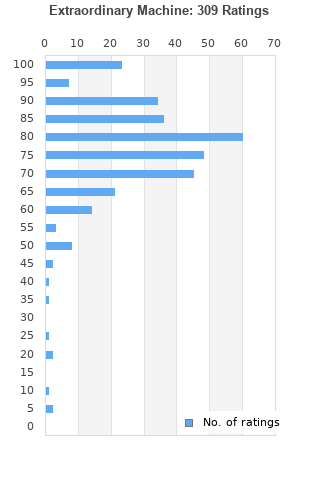 NEW FIONA APPLE - EXTRAORDINARY MACHINE CD (2012)
Condition: Brand New
Time left: 2d 8h 16m 56s
Ships to: Worldwide
$10.99
Go to store
Product prices and availability are accurate as of the date indicated and are subject to change. Any price and availability information displayed on the linked website at the time of purchase will apply to the purchase of this product.  See full search results on eBay

Extraordinary Machine is ranked 4th best out of 5 albums by Fiona Apple on BestEverAlbums.com.

The best album by Fiona Apple is The Idler Wheel Is Wiser Than The Driver Of The Screw And Whipping Cords Will Serve You More Than Ropes Will Ever Do which is ranked number 326 in the list of all-time albums with a total rank score of 6,087. 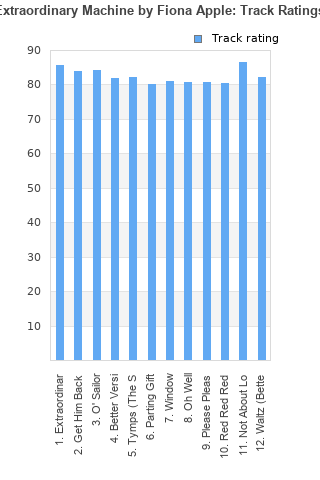 Rating metrics: Outliers can be removed when calculating a mean average to dampen the effects of ratings outside the normal distribution. This figure is provided as the trimmed mean. A high standard deviation can be legitimate, but can sometimes indicate 'gaming' is occurring. Consider a simplified example* of an item receiving ratings of 100, 50, & 0. The mean average rating would be 50. However, ratings of 55, 50 & 45 could also result in the same average. The second average might be more trusted because there is more consensus around a particular rating (a lower deviation).
(*In practice, some albums can have several thousand ratings)
This album is rated in the top 4% of all albums on BestEverAlbums.com. This album has a mean average rating of 77.0/100. The trimmed mean (excluding outliers) is 77.8/100. The standard deviation for this album is 15.5.

Every song on here is a hit. Not About Love (and its music video) are astounding. I can't believe this isn't considered her masterpiece.

O'sailor is my fav song of the record, I love the sedated feeling and sexual tone in her voice.

I think this album is definitely better than Tidal.

I've always been surprised by the low rank of this album since I consider it to be her second best. Then I realized it's because I've been listening to bootleg version of this album all along! *MIND BLOWN* Extraordinary Machine has two versions - the bootleg Jon Brion version and the official Mike Elizondo release. The Brion bootleg is generally celebrated because of its dense production filled with colorful George Martin-esque string arrangements and many people were disappointed when she released instead the Elizondo version which is stripped of those arrangements and has a more somber quality. I would listen to both versions and figure out which one you like better! :D

I'd say this is her weakest album. None of the songs really seem to stand out.

This album should be ranked so much higher. One of the best female rock albums

She's aging like fine wine... Gaining complexity and substance with every album... But why do we have to wait 5 years each time?

I agree. The original version is better. If only that would have been completed and mixed...

Your feedback for Extraordinary Machine