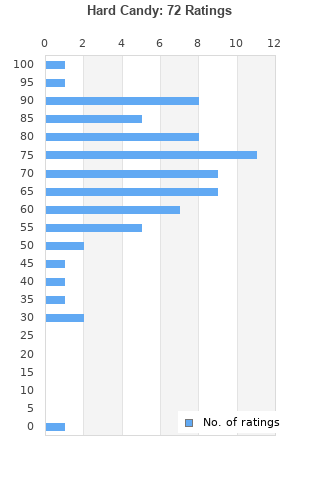 Hard Candy by Counting Crows (CD, Jul-2002, Geffen)
Condition: Very Good
Time left: 18h 50m 24s
Ships to: Worldwide
$5.99
Go to store
Product prices and availability are accurate as of the date indicated and are subject to change. Any price and availability information displayed on the linked website at the time of purchase will apply to the purchase of this product.  See full search results on eBay

Hard Candy is ranked 3rd best out of 14 albums by Counting Crows on BestEverAlbums.com.

The best album by Counting Crows is August And Everything After which is ranked number 580 in the list of all-time albums with a total rank score of 3,303. 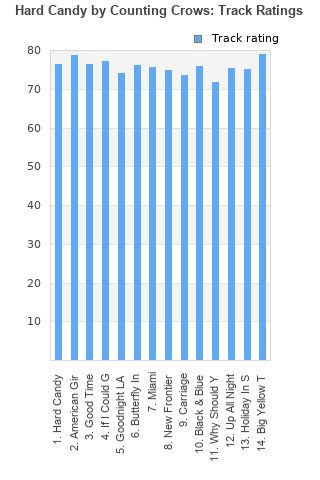 Rating metrics: Outliers can be removed when calculating a mean average to dampen the effects of ratings outside the normal distribution. This figure is provided as the trimmed mean. A high standard deviation can be legitimate, but can sometimes indicate 'gaming' is occurring. Consider a simplified example* of an item receiving ratings of 100, 50, & 0. The mean average rating would be 50. However, ratings of 55, 50 & 45 could also result in the same average. The second average might be more trusted because there is more consensus around a particular rating (a lower deviation).
(*In practice, some albums can have several thousand ratings)
This album has a Bayesian average rating of 71.4/100, a mean average of 71.0/100, and a trimmed mean (excluding outliers) of 71.0/100. The standard deviation for this album is 15.8.

It's a good album, but most of it is a bit 'safe' and over produced. Good Time is by far the best track.

I compare Counting Crows to a Hard Candy. You can spin it, twirl it, bite it, and it will still taste sweet, but ultimately it will stubbornly keep its shape and form.

Counting Crows 4th album sounds much like anything that came before. Of the four, it is the most glazed with a pop coating throughout.

New Frontier is infectious pop and shows another side to the band. Some fans will hate it because it is too pop and happy sounding

It tacks in a little lengthy on the discometer but I think its their 2nd best album narrowly beating out This Desert Life.

The debut and Hard Candy get more spins than their other albums from me. But I stopped listening to this band after Hard Candy

Most consistent album since their debut. Hailed as a comeback by many at the time of its release. The hidden track became a surprise hit.

Just too clean. This is basically where they dropped off my radar and into Adult Contemporary territory.

Your feedback for Hard Candy