The New Abnormal (album) by The Strokes The New Abnormal by The Strokes
Year: 2020
Release date: 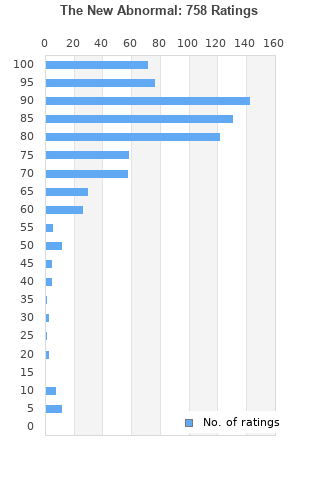 The New Abnormal is ranked 6th best out of 6 albums by The Strokes on BestEverAlbums.com.

The best album by The Strokes is Is This It which is ranked number 21 in the list of all-time albums with a total rank score of 43,527. 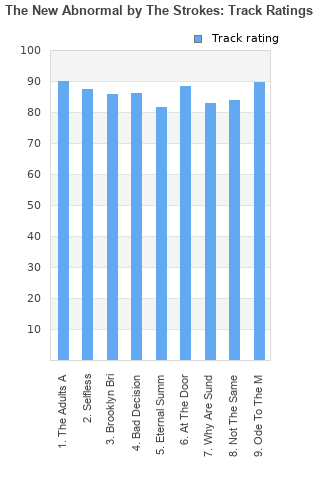 The Adults Are Talking
Rating: 90 (168 votes)Comments:

Rating metrics: Outliers can be removed when calculating a mean average to dampen the effects of ratings outside the normal distribution. This figure is provided as the trimmed mean. A high standard deviation can be legitimate, but can sometimes indicate 'gaming' is occurring. Consider a simplified example* of an item receiving ratings of 100, 50, & 0. The mean average rating would be 50. However, ratings of 55, 50 & 45 could also result in the same average. The second average might be more trusted because there is more consensus around a particular rating (a lower deviation).
(*In practice, some albums can have several thousand ratings)
This album is rated in the top 1% of all albums on BestEverAlbums.com. This album has a mean average rating of 83.0/100. The trimmed mean (excluding outliers) is 84.4/100. The standard deviation for this album is 14.6.

The culmination of all their sounds, but so tightly constructed with some top-notch vocal deliveries from Casablancas. It seems like he's delivering with his effortless cool vibe as always, but is now showing shades of vulnerability in his lyrics, adding another layer to the overall music: regret, guilt, unrequited love, and loneliness. The instrumentation is tight as always.

This is a marvelous album for me already! A masterpiece and a great Strokes return!!! Have heard it more than 100 times and I love it even more!!

At first I didn't care all that much about it, I found the singles to be ok, but I wasn't exactly excited for it. But once I heard it, it clicked with me. I loved it and replayed it a few times. All the tracks are solid, something that didn't happen since Is This It. For me, The New Abnormal is competing with Room On fire for the second place in The Strokes discography. The vibe is unique, it feels refreshing and focused. Nothing feels like filler. Just an outstanding piece of music.

Haven’t read the critics reviews but I’m now intrigued to read what their issue is with this album having read comments below. I’ve listened to the album over a dozen times now and it is a true return to form. Not that they have released any stinkers but this is a return to legendary rock status. It’s a progressive backtrack... if that oxymoron makes any sense...

Not sure I understand what the critics were saying.. This is really good stuff!

The critics can eat me...This album is terrific!

Your feedback for The New Abnormal