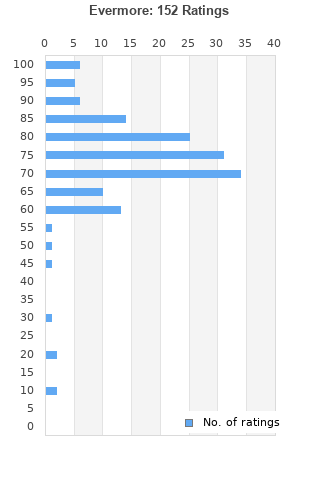 Evermore is ranked 6th best out of 15 albums by Taylor Swift on BestEverAlbums.com.

The best album by Taylor Swift is Folklore which is ranked number 988 in the list of all-time albums with a total rank score of 1,870. 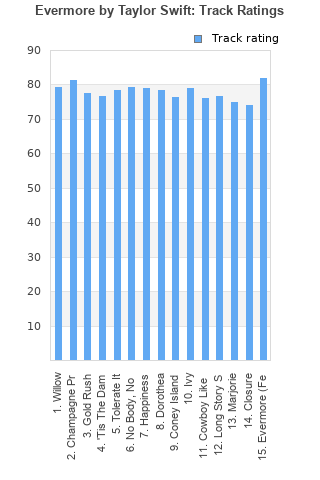 Rating metrics: Outliers can be removed when calculating a mean average to dampen the effects of ratings outside the normal distribution. This figure is provided as the trimmed mean. A high standard deviation can be legitimate, but can sometimes indicate 'gaming' is occurring. Consider a simplified example* of an item receiving ratings of 100, 50, & 0. The mean average rating would be 50. However, ratings of 55, 50 & 45 could also result in the same average. The second average might be more trusted because there is more consensus around a particular rating (a lower deviation).
(*In practice, some albums can have several thousand ratings)
This album is rated in the top 12% of all albums on BestEverAlbums.com. This album has a Bayesian average rating of 75.1/100, a mean average of 73.9/100, and a trimmed mean (excluding outliers) of 75.2/100. The standard deviation for this album is 13.6.

The best album of TS

This is very similar to Folklore and it is extremely difficult to tell them apart. I would say this is the slightly weaker of the two only cause I prefer more songs on Folklore but that is solely on personal preference as musically there isn't much between them. I do think the songs sound a lot more mature for Taylor as she starts to get older and that really adds a grand feel to the music she creates. A wonderful atmosphere is also created by the artist and you are kept in this bubble for the full run time. However, I do think. like with Folklore, the album just lacks substance and could be cut down quite a bit. Around 6 or 7 tracks are brilliant and the rest feel more like filler. The songs do get a bit repetitive in structure by the end as well and you start to crave something different. Overall, if you enjoyed Folklore you will love this as it has several amazing tracks to get stuck into but it also has faults that hold the album back from its true potential

Not as good as Folklore, but still trending in the right direction.

I mean it's basically second verse, same as yada yada, perhaps going more for a single-friendly 4x4 sound even from an artist who really doesn't need hit singles anymore. But going by another cliche that a good scientest doesn't repeat an experiment with the same hypothesis, this is basically the same mixture of elements where the difference is really only in some individual details, not what it;s trying to achieve. For the most part it just shows that despite the messianic hype (I know I've used that term before but absolutely nothing matched the foaming praise of Folklore), her previous album was not really putting forward anything new, just shaggier sounds given a more expensive re-stiching. Again like the last album this has a pleasent atmosphere and the move away (mostly) from the first-person narrative can make the storytelling in her songs feel a bit more engaging and expansive than usual, but in the end it still feels too self-aware and calculated and ultimately a rather un-necessary victory lap by an industry titant pretending she's having to chop wood for survival.

A lot better than Folklore IMO, and I appreciated Folklore a lot. It is was more coherent and each tracks are great. My favs: Champagne problems, Tis the damn season, No body no crime, tolerate it and Coney Island.

Swift could have made one incredible album in 2020 that would have contended for album of the year, but instead she went for releasing two; both Folklore and Evermore have great parts but don't add up to anything special. Evermore feels like the weaker of the two to my ears, though I will accept that it is full of really solid moments.

Take the best tracks from the two albums and you've got something really great, I think.

Agreed that this is better than folklore. Although, it's very telling that my favorite song here is "coney island," because that National sensibility is really showing, to the point that I'd kind of be interested to see a The National & Taylor?

Anyway, I'm still not super keen on this, but it's the first time where I wasn't clawing my way through a Swift album to understand the appeal.

Hot take, but this is the better album between this and Folklore. Dessner's production and writing grounds the album, lots of fantastic collaborators, and just more fulfilling. The final track, Evermore, is Swift at her all-time best.

Feels almost identical to Folklore, and if you’re a fan of that, this will hit the spot. Doesn’t hit as hard and it’s very clear that this is the Untitled Unmastered to To Pimp A Butterfly. Solid, just not as great.

Your feedback for Evermore