One By One (album) by Foo Fighters 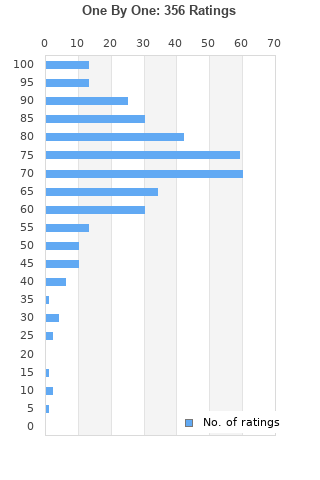 One By One is ranked 6th best out of 14 albums by Foo Fighters on BestEverAlbums.com.

The best album by Foo Fighters is The Colour And The Shape which is ranked number 319 in the list of all-time albums with a total rank score of 6,191. 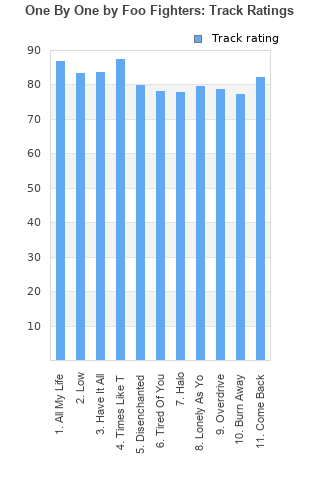 One By One rankings

One By One collection

One By One ratings

Outliers can be removed when calculating a mean average to dampen the effects of ratings outside the normal distribution. This figure is provided as the trimmed mean. A high standard deviation can be legitimate, but can sometimes indicate 'gaming' is occurring. Consider a simplified example* of an item receiving ratings of 100, 50, & 0. The mean average rating would be 50. However, ratings of 55, 50 & 45 could also result in the same average. The second average might be more trusted because there is more consensus around a particular rating (a lower deviation).
(*In practice, some albums can have several thousand ratings)
This album has a mean average rating of 71.0/100. The trimmed mean (excluding outliers) is 71.6/100. The standard deviation for this album is 15.6.

One By One favourites

One By One comments

Showing latest 10 comments | Show all 21 comments | Most Helpful First | Newest First
(Only showing comments with -2 votes or higher. You can alter this threshold from your profile page. Manage Profile)

Solid album. Liked this more than their previous album There is Nothing Left to Lose.

A bit like the way I felt about Kings of Leon initially, but after a few listens I started to love this album having only picked it up in 2017. Disenchanted Lullaby and Tired Of You are such excellent tracks and right up there with my all time favourites

It's a mystery to me how a band with great drumming, decent guitars and some pretty good songs can somehow sound so completely featureless. Maybe it's because there aren't a lot of creative risks happening? It all kind of sounds like a radio-friendly antiseptic version of Sugar. The band just refuses to let their sound reach a noisy catharsis. I think it's the safest sounding "hard rock" I've ever heard.

Why junodog hatin on Times Like These? Seriously one of the best pure rock songs ever.

The Foos becoming their own band, for better or worse. First 5 songs are great, but the whole album could be about 10 minutes shorter if they trimmed the fat on each track a bit. The production here just feels right, but the songs go on and on.

The only album I have a signed copy from all the band members... only cause I made it to the album release party at a Virgin records store.

Low is best track and probably one of my top 10 Foo songs.

Everyone knows the singles are excellent. All My Life is a top 5 Foo song.

It starts very strong through 5 songs and then like the debut falls of the rails.

Foo Fighters stick out because they do straight rock better than other bands do. The back side of this album is as middling and forgetful as other average rock acts and for that, it gets a low rating.

Its better than the debut and sonic highways but that's it.

This and The Colour and the Shape are the foos best albums. This is extremely underrated it's great from start to finish not a bad song

Your feedback for One By One