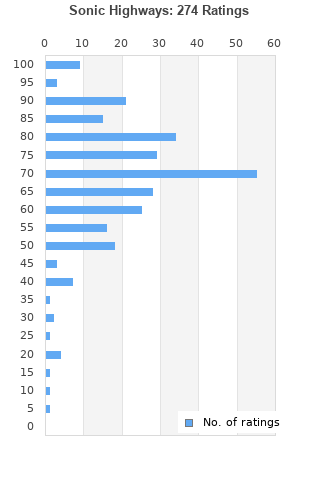 Sonic Highways [Slipcase] by Foo Fighters (CD, Nov-2014, Columbia (USA))
Condition: Very Good
Time left: 16h 17m 2s
Ships to: Worldwide
$0.99
Go to store
Product prices and availability are accurate as of the date indicated and are subject to change. Any price and availability information displayed on the linked website at the time of purchase will apply to the purchase of this product.  See full search results on eBay

Sonic Highways is ranked 7th best out of 14 albums by Foo Fighters on BestEverAlbums.com.

The best album by Foo Fighters is The Colour And The Shape which is ranked number 324 in the list of all-time albums with a total rank score of 6,132. 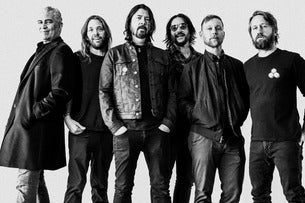 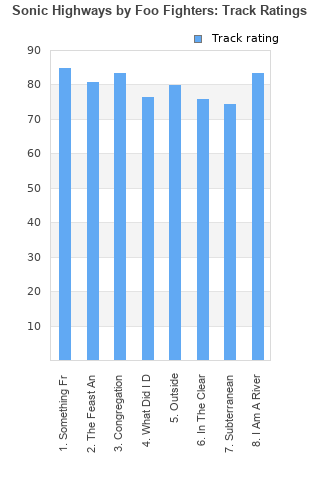 Rating metrics: Outliers can be removed when calculating a mean average to dampen the effects of ratings outside the normal distribution. This figure is provided as the trimmed mean. A high standard deviation can be legitimate, but can sometimes indicate 'gaming' is occurring. Consider a simplified example* of an item receiving ratings of 100, 50, & 0. The mean average rating would be 50. However, ratings of 55, 50 & 45 could also result in the same average. The second average might be more trusted because there is more consensus around a particular rating (a lower deviation).
(*In practice, some albums can have several thousand ratings)
This album has a Bayesian average rating of 69.4/100, a mean average of 68.6/100, and a trimmed mean (excluding outliers) of 69.3/100. The standard deviation for this album is 16.5.

I had high hopes for this album, but when it came out it turned out to be just another Foo Fighters album. The first three songs and number five are good and the rest is more filler material.

My god, what a mess. The Foos went from the critical success of their previous album 'Wasting Light', and right off a cliff-edge. The record starts with the mostly inoffensive, but fairly mundane 'Something From Nothing' and ends on the frankly awful 'I Am A River'. What's most disappointing is that 'Sonic Highways' had some very talented people (Butch Vig, Tony Visconti, Grohl himself) involved with the production, only then to come out with a forgettable, half listenable, dad rock album. One word, disappointing, from a band that had previously came out with songs such as 'Everlong' and 'Walk'.
Strongest (or least weak) tracks: 'Something From Nothing', 'Congregation'.
Weakest tracks: 'What Did I Do? / God As My Witness', 'I Am A River'.

Did not like this at first. Gave it another listen. And glad I did. Solid album. Can always count on the Foos to release good to really good albums.

Well I'm all weird with the Foos. My fave is Wasting Light, and I love Sonic Highways. Feels more complex than anything they've released, and also cool and catchy as hell. Definitely better than Concrete And Gold. The show and the cities concept is also great.
Best songs: Something From Nothing, I Am The River, The Feast And The Famine

Only the first song is good

Another cookie cutter snooze fest from the kings of regurgitated tripe . Just listen to their debut album & save yourself the trouble of listening to subsequent releases as they all sound exactly the same .

This album feels like a pretty big gimmick overall, with each song referencing the music scene of the city that the song was recorded in (8 songs, 8 cities), and you usually have to watch the show they released alongside the album to understand the references. Sonically this album has some high points however, such as the track "I am a River"

Sonic Highways is probably the Foo Fighters most ambitious LP, with long songs and each song recorded in a different studio. At first I was underwhelmed, but after more listens I discovered there is a lot to appreciate on this album. The first three songs are super fun and rock very hard, while the rest take on a gentler and prettier sound. The result is smooth and impressive considering how the Foo Fighters chose to produce it.

I felt Wasting Light was a really good effort, this one though despite the cool concept felt a lot more forgettable unfortunately. Still solid, but not great

When I first heard this I wasn't terribly excited by it, it was good, but a bit too classic rock/formulaic. It's since grown on me past that and watching the documentary exploded my understanding of it and appreciation of it. There's rumor of a European version, but I agree, it'd be nice if Foo started doing something unique... then again that's not Foo... they aren't the artsy type... they are the kick your ass amazing rockers.

By the way, the Zack Brown guitar solo is AMAZING!!! It first almost sounds like an organ... and then just blows my mind. I wish the mix made it a bit louder above the rest, but still good.

Your feedback for Sonic Highways