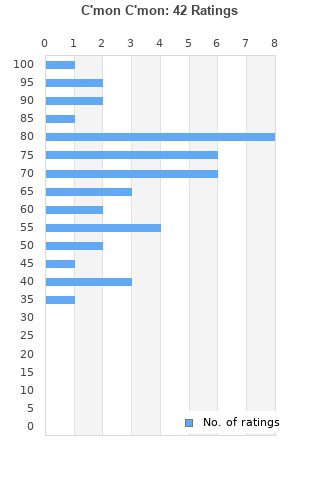 C'mon C'mon is ranked 4th best out of 13 albums by Sheryl Crow on BestEverAlbums.com.

The best album by Sheryl Crow is Sheryl Crow which is ranked number 2483 in the list of all-time albums with a total rank score of 634. 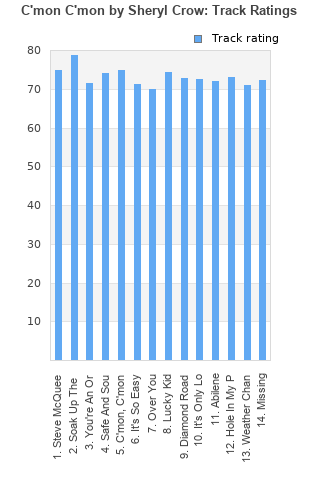 Rating metrics: Outliers can be removed when calculating a mean average to dampen the effects of ratings outside the normal distribution. This figure is provided as the trimmed mean. A high standard deviation can be legitimate, but can sometimes indicate 'gaming' is occurring. Consider a simplified example* of an item receiving ratings of 100, 50, & 0. The mean average rating would be 50. However, ratings of 55, 50 & 45 could also result in the same average. The second average might be more trusted because there is more consensus around a particular rating (a lower deviation).
(*In practice, some albums can have several thousand ratings)
This album has a Bayesian average rating of 69.6/100, a mean average of 68.6/100, and a trimmed mean (excluding outliers) of 68.6/100. The standard deviation for this album is 16.8.

Sheryl Crow enters the new millennia with her most successful album, headed by the massive hit single Soak Up The Sun and melodic, straightforward guitar rock with some 70s vibes and infectious choruses. There's a booming and rich quality to most of the songs on the record, including ballads like Safe and Sound, that are different from her more vulnerable ballads on past records.

I can't help but embrace the simple melodies, the political lyrics and the radio-friendly sound, even if this is a far cry from Crow's early records. This is Crow fully embracing her skills as a singer-songwriter capable of crafting hit songs and unforgettable mood-lifters (the beautiful duet It's So Easy being a prime example). Meanwhile, Crow still shows she has that raw and rocking aspect tucked away somewhere like Lucky Kids goes on to prove.

That's not to say this album is pure perfection. There are plenty of filler tracks, particularly in the middle, and there is surprisingly little variation in melody and rhythm. The second half kind of stumbles away, failing to bring anything new to the mix. The sleepy Weather Channel definitely doesn't help to make the second half stand out more.

More pop and country sounding. A 'nice' album with most of the rocky sound of her last couple albums gone.

Your feedback for C'mon C'mon