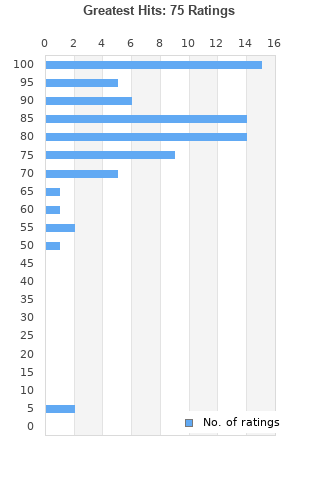 Greatest Hits is ranked 14th best out of 23 albums by Björk on BestEverAlbums.com.

The best album by Björk is Homogenic which is ranked number 114 in the list of all-time albums with a total rank score of 15,156. 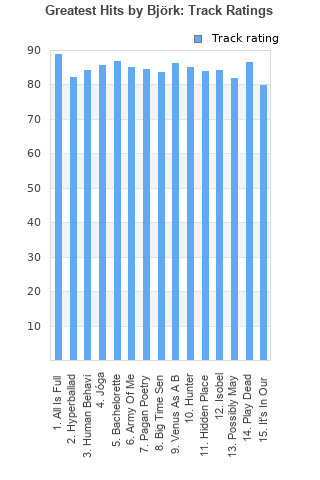 Outliers can be removed when calculating a mean average to dampen the effects of ratings outside the normal distribution. This figure is provided as the trimmed mean. A high standard deviation can be legitimate, but can sometimes indicate 'gaming' is occurring. Consider a simplified example* of an item receiving ratings of 100, 50, & 0. The mean average rating would be 50. However, ratings of 55, 50 & 45 could also result in the same average. The second average might be more trusted because there is more consensus around a particular rating (a lower deviation).
(*In practice, some albums can have several thousand ratings)
This album is rated in the top 1% of albums on BestEverAlbums.com. This album has a mean average rating of 81.0/100. The trimmed mean (excluding outliers) is 83.6/100. The standard deviation for this album is 18.0.

Björk's career has been one defined by her uncompromising nature and by her versatility. This album showcases the best of those two characteristics, as well as the high quality of her songwriting and production values. As you would expect from a greatest hits compilation, most of the well-known tracks are here, along with a few surprises. One welcome addition is the Fluke Minimix of Big Time Sensuality, which elevates an already brilliant song to new heights. Björk is an artist for our time, and this compilation (hopefully only at the relative dawn of her recording timeline) is an excellent screenshot of her music up to that point.

Björk is my favourite artist, but even though she has pop tendencies, she's most definitely more of an "album artist" than a "single artist", which is primarily why this collection (although filled with great singles of the 90s and early 00s) just doesn't really work for me. The lack of cohesion is jarring, although I can certainly appreciate the sheer brilliance on offer. She'll go down as one of the greatest artists of our generation, but hopefully because of albums like "Homogenic", "Vespertine" & "Medúlla" rather than a greatest hits compilation.

Bjork's Greatest Hits strangely omits her biggest mainstream hit single (It's Oh So Quiet) that aside, this is simply the best of Bjork.

There are very few accounts in which I will suggest greatest hits albums over cherry-picking a discography. This is one of those.

Close To You: A Tribute To The Carpenters
Genesee Theatre, Waukegan, United States.