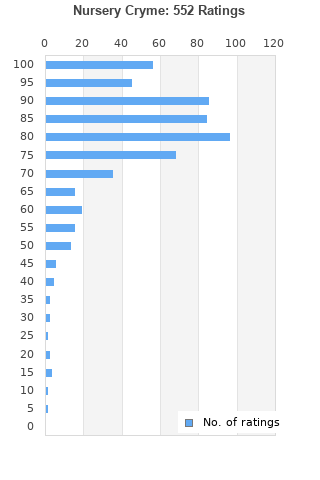 Nursery Cryme is ranked 5th best out of 33 albums by Genesis on BestEverAlbums.com.

The best album by Genesis is Selling England By The Pound which is ranked number 127 in the list of all-time albums with a total rank score of 12,898. 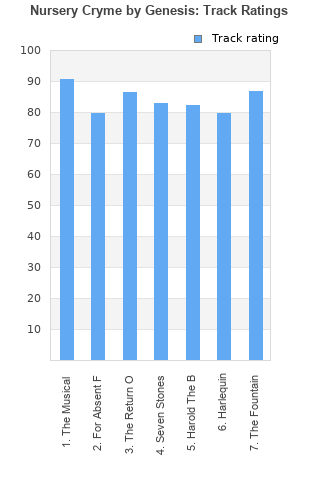 The Return Of The Giant Hogweed
Rating: 86 (151 votes)Comments:

The Fountain Of Salmacis
Rating: 86 (155 votes)Comments:

Rating metrics: Outliers can be removed when calculating a mean average to dampen the effects of ratings outside the normal distribution. This figure is provided as the trimmed mean. A high standard deviation can be legitimate, but can sometimes indicate 'gaming' is occurring. Consider a simplified example* of an item receiving ratings of 100, 50, & 0. The mean average rating would be 50. However, ratings of 55, 50 & 45 could also result in the same average. The second average might be more trusted because there is more consensus around a particular rating (a lower deviation).
(*In practice, some albums can have several thousand ratings)
This album is rated in the top 1% of all albums on BestEverAlbums.com. This album has a Bayesian average rating of 81.1/100, a mean average of 80.1/100, and a trimmed mean (excluding outliers) of 81.3/100. The standard deviation for this album is 15.7.

Genesis delivers another gem in its classic prog period with this album. The Genesis signature is everywhere with the inclusion of Collins and Hackett. It's a bit raw and all of the place, but this is what I like about it. It's part of the charm.

The prog rock songs are great and Seven Stones lives up to them, but there are few duds in the second half that distract you from the very good last one.

What a way for the classic line up to stamp their mark...The Musical Box, an outstanding piece of music and storytelling. I only wish Stagnation had been done by this line up, even The Knife. For Absent Friends is a nice introduction to Phil and Steve, a kind of keep off the grass number and a theme Steve would revisit plenty on his solo work. Hogweed doesn't interest me. Another highlight is Seven Stones, the instrumental section is awesome. Harold The Barrel is a good story but I particularly like Harlequin and it's probably my favourite on the record. I love the harmonics and the pastoral shade it paints. Fountain is a great closer.

Vastly underrated album, it may not be their best but it is certainly their most consistent, no dud tracks here, Harold the Barrel is certainly not naive as mentioned elsewhere, it is about a depressed man taking his own life and the line about cutting off his toes and serving them in his restaurant is just an example of vicious rumours that are likely a cause of his depression, it is a brilliant track, highlight for me though is Seven Stones, that outro is just hairs on the back of your neck standing up excellent.

Very underrated. The Musical Box makes this album, it's a true masterpiece. Plus, The Fountain of Salmacis is excellent, and The Return of the Giant Hogweed a solid track.

The Musical Box is huge, one of their best, but the rest of the album doesn't reach the same heights.

With Phil Collins and Steve Hackett now in the band, Genesis have their classic line up. The songs are more advanced than Trespass. Though still a bit daft and story based, the ideas are interesting. The result is a little bit Paul McCartney ("Penny Lane", "Lady Madonna") and a little bit Bowie's first album, and a little bit 6th form naïve and primitive, such as "Harold the Barrel", a story of a restaurant owner who cut off his toes to serve to customers and then runs away - the story is told from the point of view of various people, the Man In The Street, the Lord Mayor, the British Public, etc, and it's all rather throw away. The songs that folks most focus on are "The Musical Box", which supplied the imagery for the album cover, and "The Return Of The Giant Hogweed". The album is quite keyboard forward and with pastoral, acoustic sounds melding with rockier and jazzy elements (supplied by the new members Collins and Hackett) it fits with the sound of the time, such as Aqualung (March 1971), Meddle (Oct 1971), Tarkus (June 1971), In The Land Of Grey And Pink (March 1971), and Fragile (Nov 1971), though lacks the confidence of those albums. It's a step forward from Trespass; Gabriel is gaining strength, and it is a pleasant album representative of its time, but is some way removed from essential listening.

A really solid album, though I don't think I like it quite as much as Trespass, as nothing quite hits the high of The Knife, and it's not as consistently good. Still, you can clearly tell that Genesis was refining its prog-rock sound in bushels, and the addition of Steve Hackett and Phil Collins to the ensemble only helped that. There are some standout tunes here, namely The Musical Box, The Return of the Giant Hogweed, and The Fountain of Salmacis, but it's clear that the best was yet to come.

Your feedback for Nursery Cryme