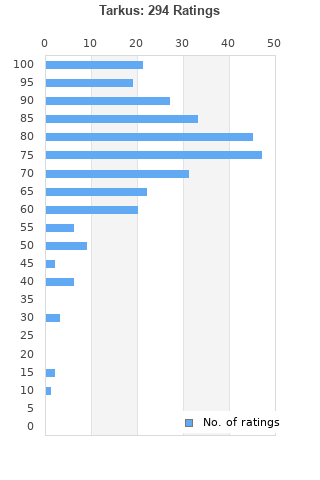 3 THE POWER OF 3 CD MINT KEITH EMERSON Lake CARL PALMER CHAINS RUNAWAY Tarkus
Condition: Like New
Time left: 1h 42m 7s
Ships to: Worldwide
$12.99
Go to store
Product prices and availability are accurate as of the date indicated and are subject to change. Any price and availability information displayed on the linked website at the time of purchase will apply to the purchase of this product.  See full search results on eBay

Tarkus is ranked 2nd best out of 13 albums by Emerson, Lake & Palmer on BestEverAlbums.com.

The best album by Emerson, Lake & Palmer is Brain Salad Surgery which is ranked number 1137 in the list of all-time albums with a total rank score of 1,605. 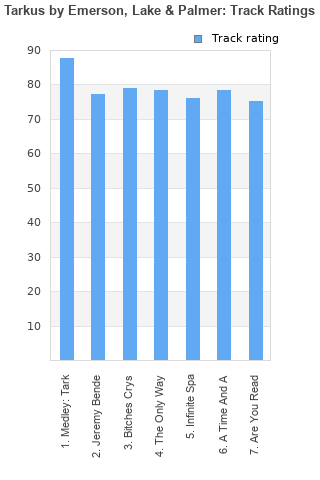 Rating metrics: Outliers can be removed when calculating a mean average to dampen the effects of ratings outside the normal distribution. This figure is provided as the trimmed mean. A high standard deviation can be legitimate, but can sometimes indicate 'gaming' is occurring. Consider a simplified example* of an item receiving ratings of 100, 50, & 0. The mean average rating would be 50. However, ratings of 55, 50 & 45 could also result in the same average. The second average might be more trusted because there is more consensus around a particular rating (a lower deviation).
(*In practice, some albums can have several thousand ratings)
This album is rated in the top 5% of all albums on BestEverAlbums.com. This album has a Bayesian average rating of 77.3/100, a mean average of 76.7/100, and a trimmed mean (excluding outliers) of 77.4/100. The standard deviation for this album is 16.0.

This album is the epitome of prog greatness. It is complex, epic, virtuosic, challenging... yet listenable and compelling.a seminal masterpiece of the genre.

I much prefer this album to 'Pictures at an Exibition'. It is a more melodic and cohesive affair. I particularly like 'Battlefield' which give 'Yes' and 'Genesis' a run for their money. I am not so keen on the way Keith Emerson chose to play his Moog, for example 'Aquatarkus' is a very 'plinky plonky' affair, great on a honky tonk piano but not on a Moog.Great honky took piano on 'Bitches Crystal' by the way. ELP albums don't really flow given that tracks move from Church organ led to honky tonk piano led to plinky plonk Moog led. Fantastic musicians, but I often get a sense they all wanted to showcase their singular abilities rather than gel as a unit.

Great, but if wasn´t for the title track tha album would be nothing.

All very competent but slightly overrated. Still, it is one of their best records, although could you honestly get away with this today?

Their most consistent by far. Probably their best overall.

Great album. One of their best

Your feedback for Tarkus