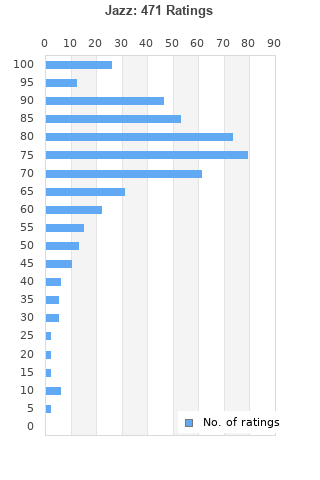 QUEEN - JAZZ - ORIGINAL USA PRESS VINYL LP
Condition: Used
Time left: 54m 6s
Ships to: Worldwide
£2.99
Go to store
Product prices and availability are accurate as of the date indicated and are subject to change. Any price and availability information displayed on the linked website at the time of purchase will apply to the purchase of this product.  See full search results on eBay

Jazz is ranked 8th best out of 47 albums by Queen on BestEverAlbums.com.

The best album by Queen is A Night At The Opera which is ranked number 89 in the list of all-time albums with a total rank score of 17,376. 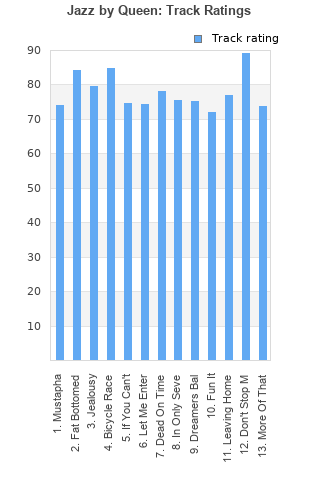 Rating metrics: Outliers can be removed when calculating a mean average to dampen the effects of ratings outside the normal distribution. This figure is provided as the trimmed mean. A high standard deviation can be legitimate, but can sometimes indicate 'gaming' is occurring. Consider a simplified example* of an item receiving ratings of 100, 50, & 0. The mean average rating would be 50. However, ratings of 55, 50 & 45 could also result in the same average. The second average might be more trusted because there is more consensus around a particular rating (a lower deviation).
(*In practice, some albums can have several thousand ratings)
This album is rated in the top 21% of all albums on BestEverAlbums.com. This album has a mean average rating of 73.0/100. The trimmed mean (excluding outliers) is 74.7/100. The standard deviation for this album is 18.1.

Truly one of the most inconsistent albums of all time, in both regards to quality and style. Don't Stop Me Now and Bicycle Race are two of Queen's finest, and I find Mustapha and More Of That Jazz to be highly underrated. And then there's In Only Seven Days, which is quite honestly awful, plus other forced filler tracks like Let Me Entertain You, Dreamers Ball, and Leaving Home Ain't Easy. Should it be in 1978's top 20 though? Yes.

I was holding out high hopes for this album, given that its infamous double A-side of ‘Fat Bottomed Girls’ and ‘Bicycle Race’ consists of two of my favourite Queen singles, but the remainder of the album is disappointing in comparison.

The obvious highlight is Don't stop me now -wich IMO is one of their best songs ever-. Fat bottomed, Bicycle, Jealousy and Dead are fine too.

2 tracks are lousy IMHO: Fun it and Mustapha wich I think is one of the worst album openers I can think of.

Ups and downs as usual.

This is my favorite Queen album. From start to finish, I like every song, particularly Dead On Time, Jealousy, and Don't Stop Me Now.

Queen's party album. It really is a hoot. As usual with queen album's the strongest songs are the singles. Fat bottomed girls, bicycle race, and the wonderful don't stop me now, are all grade A queen tracks. Other standouts are Freddie's bizarre Mustapha, his beautiful ballad, jealousy, and Brian's overlooked gem, leaving home ain't easy. There's plenty of rocking going on here with, let me entertain you, and John's if you can't beat them. Not all the tracks are great, but there's nothing bad here. It's just good fun.

Queen followed up their massive worldwide success from "NEWS OF THE WORLD" with "JAZZ" . Reviewers were quick to lambaste this album, which included the scathing Rolling Stone review that suggests "Queen may be the first truly fascist rock band".

It was criticized for its alternating styles; that what I appreciate about this diverse album. Polished with an abundance of Brian May's layered guitars, the band remains typically tight. Plenty of Mercury's ear shattering vocals. This also marks the last time that Queen recorded without the use of synthesizers.

There's a notion that was Queen was arrogant and self-important band that took themselves far too seriously... if true, it doesn't show on this release. It's a fun with great songs such as "Bicycle Race", "Let Me Entertain You", "Fat Bottomed Girls", " Dead on Time" and "Don't Stop Me Now".

Your feedback for Jazz