A Change Of Seasons (studio album) by Dream Theater 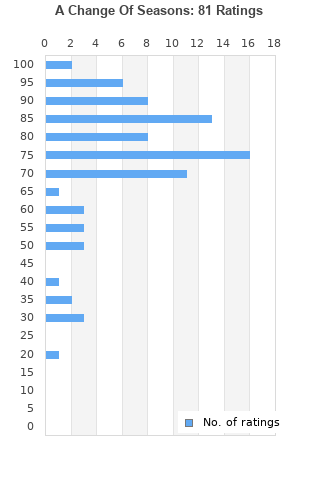 A Change Of Seasons is ranked 11th best out of 35 albums by Dream Theater on BestEverAlbums.com.

The best album by Dream Theater is Metropolis Pt. 2: Scenes From A Memory which is ranked number 674 in the list of all-time albums with a total rank score of 2,765. 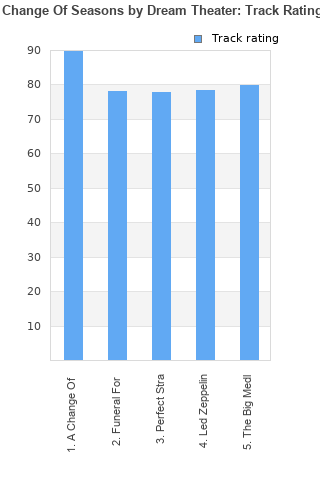 A Change Of Seasons
Rating: 89 (43 votes)Comments:

A Change Of Seasons rankings

A Change Of Seasons collection

A Change Of Seasons ratings

Rating metrics: Outliers can be removed when calculating a mean average to dampen the effects of ratings outside the normal distribution. This figure is provided as the trimmed mean. A high standard deviation can be legitimate, but can sometimes indicate 'gaming' is occurring. Consider a simplified example* of an item receiving ratings of 100, 50, & 0. The mean average rating would be 50. However, ratings of 55, 50 & 45 could also result in the same average. The second average might be more trusted because there is more consensus around a particular rating (a lower deviation).
(*In practice, some albums can have several thousand ratings)
This album has a Bayesian average rating of 73.9/100, a mean average of 74.0/100, and a trimmed mean (excluding outliers) of 74.0/100. The standard deviation for this album is 18.1.

A Change Of Seasons favourites

A Change Of Seasons comments

The title track is one of the best songs every written in my opinion. Other than that there isn't an awful lot to recommend. It is good, but it's classed as an EP and not an album.

Great stuff by the masters of progressive Metal, especially Funeral For A Friend/Love Lies Bleeding and The Big Medley...

Interesting idea, but they have done much better.

Contains a single unbelievable 24-minute song (A Change of Seasons, and a few decent covers. A must-own for Dream Theater/prog fans; the 24-minute epic is as close to classic prog as Dream Theater would come until Octavarium 10 years later.

Your feedback for A Change Of Seasons