The Opposite Of December (studio album) by Poison The Well 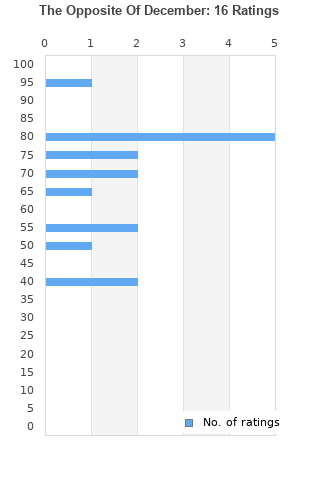 The Opposite Of December is ranked as the best album by Poison The Well. 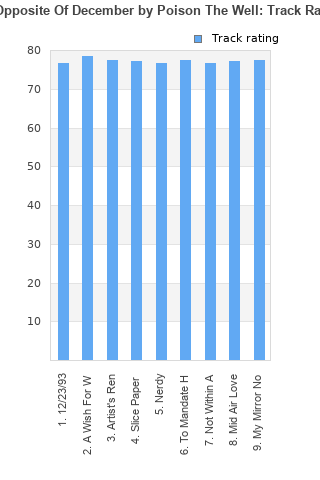 The Opposite Of December rankings

The Opposite Of December collection

The Opposite Of December ratings

Rating metrics: Outliers can be removed when calculating a mean average to dampen the effects of ratings outside the normal distribution. This figure is provided as the trimmed mean. A high standard deviation can be legitimate, but can sometimes indicate 'gaming' is occurring. Consider a simplified example* of an item receiving ratings of 100, 50, & 0. The mean average rating would be 50. However, ratings of 55, 50 & 45 could also result in the same average. The second average might be more trusted because there is more consensus around a particular rating (a lower deviation).
(*In practice, some albums can have several thousand ratings)
This album has a Bayesian average rating of 70.0/100, a mean average of 68.1/100, and a trimmed mean (excluding outliers) of 68.1/100. The standard deviation for this album is 15.4.

The Opposite Of December favourites

The Opposite Of December comments

No BFMV, No Killswitch Engage, No PTH and No one else could have expressed more detailed the broken-hearted lyrics, the sweetest melodies, brutal breakdowns and the emo metalcore style than the first Poison The Well album.

This band have influenced so much in the Melodic Metalcore style, of course because their debut is the first album of this genre, but don't fault them, Poison The Well is obviously that them wants to combine the hardcore style of Converge, Cave In or Drive Like Jehu with emo like Get Up Kids, Sunny Day Real State and others, the other melodic Metalcore bands, just are copy of this album.

Also, this album not have excess of production, is are the opposite, the production is very dirty, because of distorted guitars, and also, have sweet melodies, and sweet landscapes of guitars (showed in "Slice Paper Wrists") than other melocore album.

No more words, the best album of this genre, 28 minutes of pure drama.

Your feedback for The Opposite Of December