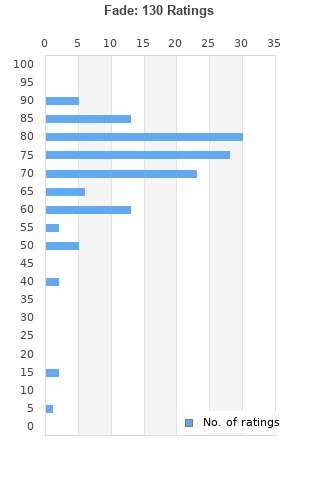 Fade is ranked 6th best out of 26 albums by Yo La Tengo on BestEverAlbums.com.

The best album by Yo La Tengo is I Can Hear The Heart Beating As One which is ranked number 448 in the list of all-time albums with a total rank score of 4,276. 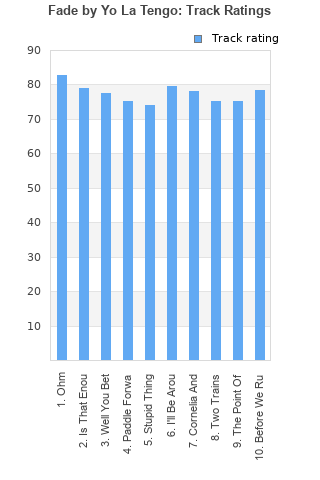 Rating metrics: Outliers can be removed when calculating a mean average to dampen the effects of ratings outside the normal distribution. This figure is provided as the trimmed mean. A high standard deviation can be legitimate, but can sometimes indicate 'gaming' is occurring. Consider a simplified example* of an item receiving ratings of 100, 50, & 0. The mean average rating would be 50. However, ratings of 55, 50 & 45 could also result in the same average. The second average might be more trusted because there is more consensus around a particular rating (a lower deviation).
(*In practice, some albums can have several thousand ratings)
This album has a Bayesian average rating of 73.3/100, a mean average of 71.9/100, and a trimmed mean (excluding outliers) of 73.3/100. The standard deviation for this album is 13.4.

Beautiful, ethereal and resoundingly easy to relate to, Yo La Tengo continue to plug away and create some of the best indie music of our generation. Heartbreakingly beautiful at times.

Yo La Tengo is one of the most consistent bands of their generation, releasing album after album of catchy indie rock that always sounds recognizably like Yo La Tengo without being overly repetitive. The subtly adventurous Fade rates as an above-average Yo La Tengo album, highlighted by the opener "Ohm," which combines many of the elements that make the band so successful at what they do: affable, jangly guitars that gradually gain in noise and intensity, while the vocal harmonies blend into a kind of mantra embodying the song's title. The result is just about as good as anything the band has ever recorded, and that's saying something.

Not quite as good as "And then nothing..." or "I'm not afraid of you..." but it's very close. It's a warm and melodic album that is consistently strong. They do intimate, melodic songwriting and more hypnotic groove based tracks equally well. Yo la Tengo are a reliably good and undervalued band. I think this is because they are so understated, but this is also their charm.

Plenty of great songs here that got under my skin. Overall the album has a cool temperament, like a lot of Yo La Tengo's music, which can seem dispassionate and detached, the way old Brazilian bossa nova sounded in the 60s, defying the heat and torment of the historical moment, but that doesn't take away from the fact that the songs are just very very good.

The best YLT since "I Can Hear the Heart.."
Soft and Nocturne.

A relaxing pleasurable album with the songs disposed from the most "concrete" to the most ethereal.

The opening and the closing tracks are outstanding new classics!

Proving that they are not ones to become complacent and stale, Yo La Tengo bust out Fade with some of their most interesting material to date. "Ohm" is an absolute standout and unlike anything the band has ever attempted before in their catalogue. Changing direction without losing heart is a difficult task for most bands, but YLT show once again that they are able to adapt their sound without abandoning their fundamental components. By my reckoning, this is the band's 9th consecutive great album, firmly cementing them as the greatest band on the planet.

I wasn't expecting this from Yo La Tengo. Fade feels like a return to the understated dreamworld of And Then Nothing Turned Itself Inside-Out. It's very relaxed, but there's enough substance to keep it floating through the end.

The best Yo La Tengo album I've heard, at once poppy and accessible, yet nicely understated. I genuinely think they've finally got a good grasp on the sound they've been striving to achieve for years now (although admittedly I've not heard their entire catalogue). A very pleasant surprise.

Your feedback for Fade