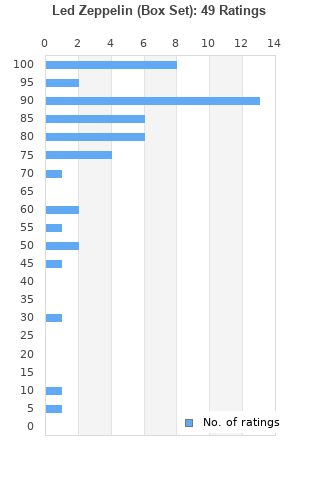 Led Zeppelin (Box Set) is ranked 19th best out of 22 albums by Led Zeppelin on BestEverAlbums.com.

The best album by Led Zeppelin is Untitled (Led Zeppelin IV) which is ranked number 11 in the list of all-time albums with a total rank score of 58,633. 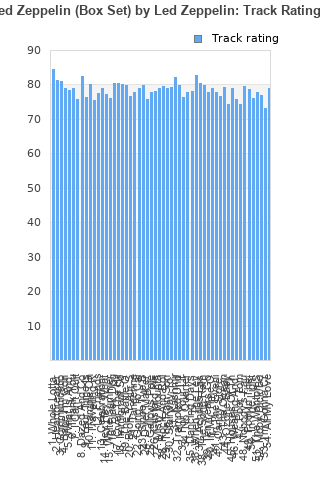 Rating metrics: Outliers can be removed when calculating a mean average to dampen the effects of ratings outside the normal distribution. This figure is provided as the trimmed mean. A high standard deviation can be legitimate, but can sometimes indicate 'gaming' is occurring. Consider a simplified example* of an item receiving ratings of 100, 50, & 0. The mean average rating would be 50. However, ratings of 55, 50 & 45 could also result in the same average. The second average might be more trusted because there is more consensus around a particular rating (a lower deviation).
(*In practice, some albums can have several thousand ratings)
This album is rated in the top 1% of all albums on BestEverAlbums.com. This album has a Bayesian average rating of 81.2/100, a mean average of 81.8/100, and a trimmed mean (excluding outliers) of 83.0/100. The standard deviation for this album is 16.3.

I've had a look at this Led Zeppelin Box for a long time, but hesitated to buy, hoping that the original albums would be reissued with interesting and relevant bonus material. Since this hope does not appear to be realistic in the near time, I decided to get it after all.

I am in no way disappointed. You get a lot for a reasonable price. In most cases - though not all - I think that the choices of tracks from the individual albums are fine and reasonable.

The excellent B-side "Hey Hey What Can I Do", which was one of the numbers I would have liked see on an extended "Led Zeppelin 3", album is thankfully included alongside with a few other rarities. Otherwise, the majority of the numbers are known from the band's eight studio albums + "Coda".

An omission, however, surprised me a lot is "Good Times, Bad Times" from the first album. For me it is one of the most immediately catchy songs with the group, and for many people this may be the first song they heard with the band as it was the opening number on the first album.

From "Physical Graffiti" I miss "Night Flight" and "Down by the Seaside".

The music sounds fine, even though it is now twenty years since Jimmy Page was behind remastering.

There is a fine extended biography, and all important details about the individual numbers can be found.

I think this box won't disappoint you - but you may feel like adding some of the orginal albums to your collection.

My introduction to Led Zeppelin as a child.