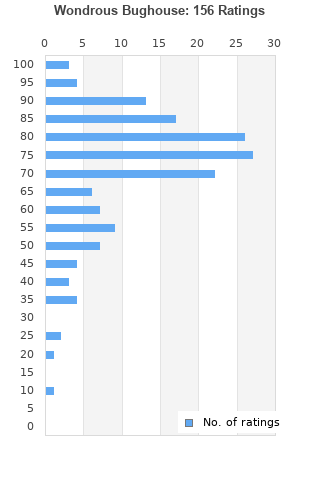 Wondrous Bughouse is ranked 2nd best out of 3 albums by Youth Lagoon on BestEverAlbums.com.

The best album by Youth Lagoon is The Year Of Hibernation which is ranked number 2520 in the list of all-time albums with a total rank score of 599. 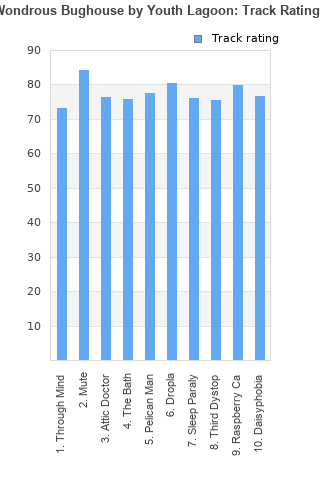 Outliers can be removed when calculating a mean average to dampen the effects of ratings outside the normal distribution. This figure is provided as the trimmed mean. A high standard deviation can be legitimate, but can sometimes indicate 'gaming' is occurring. Consider a simplified example* of an item receiving ratings of 100, 50, & 0. The mean average rating would be 50. However, ratings of 55, 50 & 45 could also result in the same average. The second average might be more trusted because there is more consensus around a particular rating (a lower deviation).
(*In practice, some albums can have several thousand ratings)
This album has a mean average rating of 71.0/100. The trimmed mean (excluding outliers) is 72.0/100. The standard deviation for this album is 16.9.

Showing latest 10 comments | Show all 20 comments | Most Helpful First | Newest First
(Only showing comments with -2 votes or higher. You can alter this threshold from your profile page. Manage Profile)

On Wondrous Bughouse, Trevor Powers' concerns move from growing up in Idaho out into the world at large. While the songs are less sincere than the debuts' Powers can still write an effective line. The music is a much more sophisticated cosmic dance, reminiscent of modern and classic psychedelic artists alike.

Guess i am missing something !! Not for me !!

Although I find Wondrous Bughouse to be less touching that The Year of Hibernation, I still prefer this record. You never feel like you listen to different songs, rather it's like the rich musical background took you for a journey through different steps. The last, the dreamy, hypnotic "Daisyphobia", leaves you helpless and soothed.

I like it as much, maybe more, as the last YL release and it is spectacular because it's so melancholy. I don't really know how to feel when I listen to it and I love it.

A more complex sound than his debut album. A more confusing sound but really interesting. It's trippy and colourful. A good album

This album is just so incredibly interesting. It’s difficult to describe it. It took me a few listens to really appreciate this album for what it is, and what it is is modern psychedelic music. There’s just so much going on, it’s like watching a Cirque Du Soleil show, you’ve got a bunch of different things going on all at once and you need a few go arounds before you realize how great each individual part is and how well it all comes together. That’s what “Wondrous Bughouse" is. You’ve got the heavily reverbed vocals, you’ve got flange effect and phaser effects left and right, you’ve got all kinds of instruments doing different things, it’s crazy. It’s an album that you need to stop and listen to to really appreciate it, one of those albums that you turn up, tune out the world, sit down, close your eyes and just listen. There are moments here and there where the music isn’t perfect, but this is certainly a good album. One that you have to really listen to to appreciate.

Not a bad album, but it is too reliant on reverb and tacky sound effects (especially on Attic Doctor, which is a fine tune that is ruined by all of the goofy noises popping up everywhere) rather than strong songwriting. Mute and Daisyphobia however are great examples of everything coming together nicely without becoming tiresome or cluttered.

So glad i found this. My favorite album of the year so far

Your feedback for Wondrous Bughouse