Sawdust (compilation album) by The Killers (US) 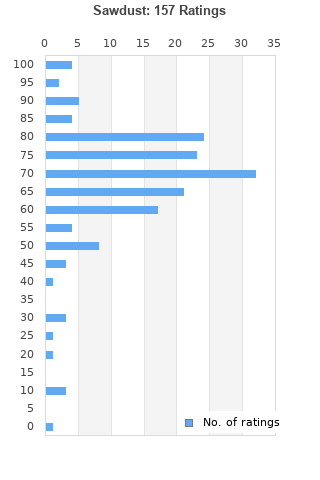 The Killers : Sawdust (CD) We combine shipping in the U.S.!
Condition: Very Good
Time left: 6d 11h 31m 49s
Ships to: Worldwide
$4.00
Go to store
Product prices and availability are accurate as of the date indicated and are subject to change. Any price and availability information displayed on the linked website at the time of purchase will apply to the purchase of this product.  See full search results on eBay

Sawdust is ranked 6th best out of 11 albums by The Killers (US) on BestEverAlbums.com.

The best album by The Killers (US) is Hot Fuss which is ranked number 188 in the list of all-time albums with a total rank score of 9,722. 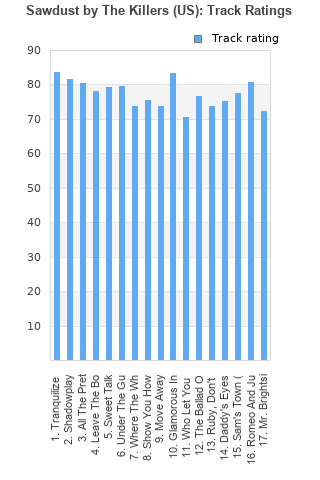 Rating metrics: Outliers can be removed when calculating a mean average to dampen the effects of ratings outside the normal distribution. This figure is provided as the trimmed mean. A high standard deviation can be legitimate, but can sometimes indicate 'gaming' is occurring. Consider a simplified example* of an item receiving ratings of 100, 50, & 0. The mean average rating would be 50. However, ratings of 55, 50 & 45 could also result in the same average. The second average might be more trusted because there is more consensus around a particular rating (a lower deviation).
(*In practice, some albums can have several thousand ratings)
This album has a Bayesian average rating of 69.6/100, a mean average of 68.1/100, and a trimmed mean (excluding outliers) of 69.3/100. The standard deviation for this album is 16.3.

I love Sawdust. I can understand why some don't care for it, but I get the impression some don't understand what this album is. It's virtually an EP plus a collection of covers and unreleased rarities. Kind of a bonus compilation. So it shouldn't be compared to the rest of their discography in the same way.

I had heard The Killers several times on radio, and actually thought pretty good about them, without noticing any specific song-titles. My first impression was that they must be British, reminding me a lot about groups like Blur and Starsailor. It was only when I heard The Killers' version of "Romeo and Juliet" that I became seriously interested. A fantastic version that deservedly brought new focus to one of Dire Staits' best songs.

When I searched on the net I also discovered that the group had recorded a new interpretation of the classic "Ruby, Don't Take Your Love to Town", which for me clearly surpassed previous versions. I had to find out where these numbers could be found on CD . It proved to my luck to both songs are found on "Sawdust, " which is a collection of outtakes and assorted oddities that have not found their way into the official albums. The music is recorded in the period 2003-2007.

Fortunately, and of course, there are also many great songs among The Killers' original material. Being brought forward deserves alternate version of "Sam's Town", a great song. The opening track "Tranquilizers", which features guest appearance by Lou Reed is another of the pleasant surprises - having both Bowie and Sparks elements. The same can probably said about "Where the White Boys Dance", an outtake from "Sam's Town".

Brit- and Indie-Pop is focused on "Glamerous Indie Rock and Roll" - could well have been a Blur song.

Magnificent but more traditional is "Daddy's Eyes". Solid straightforward rock can be found on "Change Your Mind ".

A beautiful and a worthy final to the set is "Mr Brightside", which in glimpses contains techno elements.

Finally "Show You How" which, with its catchy guitar theme is a song must return to. A very fine CD which actually works fine as a whole - a real album.

Tranquilize and Indie R&R are (the only) good tracks.

This is a B-sides album where there is good reason for the songs being B-sides. Not many good tracks to speak of here. Best tracks: Sam's Town (Abbey Road Version), The Ballad Of Michael Valentine, Tranquilize, and their cover of Romeo and Juliet.

Your feedback for Sawdust