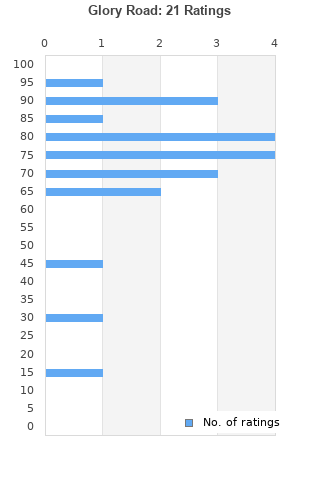 Gillan Glory Road, promotional LP 1980 with additional flexi insert
Condition: Used
Time left: 1d 10h 53m 27s
Ships to: Worldwide
£5.00
Go to store
Product prices and availability are accurate as of the date indicated and are subject to change. Any price and availability information displayed on the linked website at the time of purchase will apply to the purchase of this product.  See full search results on eBay

Glory Road is ranked as the best album by Gillan. 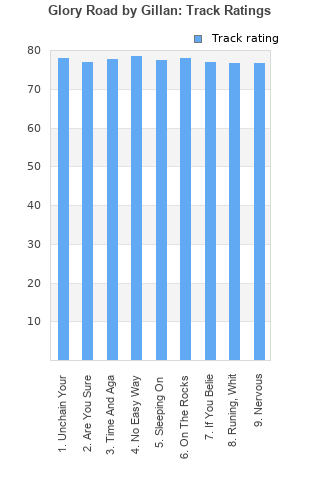 Rating metrics: Outliers can be removed when calculating a mean average to dampen the effects of ratings outside the normal distribution. This figure is provided as the trimmed mean. A high standard deviation can be legitimate, but can sometimes indicate 'gaming' is occurring. Consider a simplified example* of an item receiving ratings of 100, 50, & 0. The mean average rating would be 50. However, ratings of 55, 50 & 45 could also result in the same average. The second average might be more trusted because there is more consensus around a particular rating (a lower deviation).
(*In practice, some albums can have several thousand ratings)
This album has a Bayesian average rating of 69.4/100, a mean average of 66.8/100, and a trimmed mean (excluding outliers) of 66.8/100. The standard deviation for this album is 21.5.

Ian Gillan - in this case the band Gillan - always had one great problem. The songwriting! Some songs are billiant! On The Rocks is outstanding... Unchain Your Brain, Sleeping On The Job, No Easy Way, Running White Face City Boy... work well... but there's also poor rubbish! Time And Again for instance is so releaxed that you fall asleep before the track ends... and - heaven helps - it's a shame that a great singer like Ian ever recorded such a boring blues like If You Believe Me... To be honest... The highlights of Glory Road, Mr. Universe and Future Shock would have made one (!) outstanding record. But we've got three mediocre releases...

But really funny was the idea on the first edition of the LP with the gimmick of the neverending track Nervous... The last seconds were repeated until forever... as long as you don't took the needle from the record manually...

This is almost as good as early Rainbow. Some really good guitar riffs and Gillan's vocals are great.

I think Mr Universe has the edge but for sure this album and Mr Universe are the two highlights in Ian Gillian's solo career. I love the simplicity of 'Time and Again', particularly the very basic keyboard chord changes.

In my opinion, Ian Gillan went downwards after these two albums and never really came back up...

Infinite by Deep Purple is the closest he has come to his original magic.

This is Gillan at their peak. Ian at his blistering screaming best with unlikely guitar god in the name of ex punk rocker Bernie Torme.

Unchain your Britain, White faced city boy are two real break neck speed songs of the early eighties definitely in contention with wrath child by the Irons as one of the paciest songs of the era. and there is the 'Eruption' type rendition by the band and it's quite awesome as well.

Your feedback for Glory Road