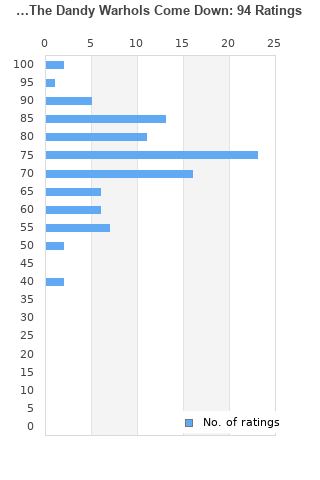 The best album by The Dandy Warhols is Thirteen Tales From Urban Bohemia which is ranked number 1763 in the list of all-time albums with a total rank score of 973.

Listen to …The Dandy Warhols Come Down on YouTube 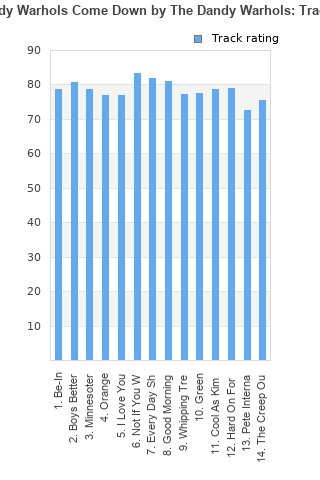 …The Dandy Warhols Come Down rankings

…The Dandy Warhols Come Down collection

…The Dandy Warhols Come Down ratings

Rating metrics: Outliers can be removed when calculating a mean average to dampen the effects of ratings outside the normal distribution. This figure is provided as the trimmed mean. A high standard deviation can be legitimate, but can sometimes indicate 'gaming' is occurring. Consider a simplified example* of an item receiving ratings of 100, 50, & 0. The mean average rating would be 50. However, ratings of 55, 50 & 45 could also result in the same average. The second average might be more trusted because there is more consensus around a particular rating (a lower deviation).
(*In practice, some albums can have several thousand ratings)
This album has a Bayesian average rating of 73.3/100, a mean average of 73.3/100, and a trimmed mean (excluding outliers) of 73.3/100. The standard deviation for this album is 11.5.

…The Dandy Warhols Come Down favourites

…The Dandy Warhols Come Down comments

Some great tracks on this. The Dandy's do have a unique style which gives them there own flavor. Picks for myself - Boys Better, Junkie on Earth, & Every Day Should Be a Holiday. Bit of filler having a monotonous plodding drone to them but overall a decent album. Last two tracks could of been left out.

I have fond memories of being in a stoner reverie listening to the hypnotic, dreamy guitar whilst supine on my bed in the mid 90s. I much prefer this to any of their templated, poppier stuff after the critically acclaimed Thirteen Tales (which is a great album). Come Down has a far more organic, meandering sound and is well worth a listen.

Had a few enjoyable moments, punctuated by a couple of longer, less enjoyable ones.

I bought this album (the first DW album I owned) because I heard and loved Junkie. The album is consistent but not spectacular. If it wasn't for compiling this chart it's not an album I'd rush to pick up on a regular basis. Let down by a few 'plodders' but overall 7/10.

The critics seem to have thought this was mediocre. I can't see why, it's consistently good.

Some really great songs ("Be In", "Cool As Kim Deal", "Not If You Were The Last Junkie On Earth")surrounded by a bit too much filler.

Your feedback for …The Dandy Warhols Come Down