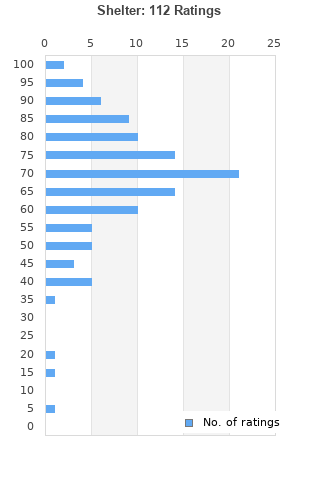 Shelter is ranked 2nd best out of 7 albums by Alcest on BestEverAlbums.com.

The best album by Alcest is Souvenirs d'un Autre Monde which is ranked number 2748 in the list of all-time albums with a total rank score of 568. 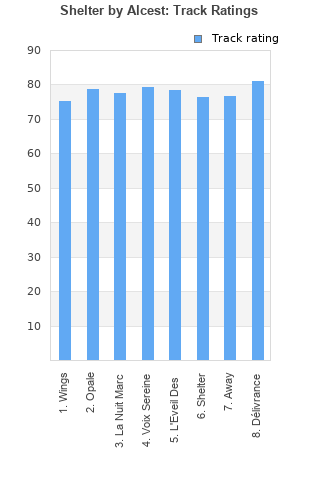 Rating metrics: Outliers can be removed when calculating a mean average to dampen the effects of ratings outside the normal distribution. This figure is provided as the trimmed mean. A high standard deviation can be legitimate, but can sometimes indicate 'gaming' is occurring. Consider a simplified example* of an item receiving ratings of 100, 50, & 0. The mean average rating would be 50. However, ratings of 55, 50 & 45 could also result in the same average. The second average might be more trusted because there is more consensus around a particular rating (a lower deviation).
(*In practice, some albums can have several thousand ratings)
This album has a Bayesian average rating of 70.1/100, a mean average of 68.8/100, and a trimmed mean (excluding outliers) of 69.9/100. The standard deviation for this album is 16.7.

I agree with MasterWhitey; "voix sereines" is absolutely gorgeous. somehow incredibly uplifting and powerful, even without knowing the translation of its lyrics (which are about feelings of liberation).

how are some of these songs rated so lowly? I don't get it. "voix sereines" and "deliverance" should be 84/100+. ridiculous.

the album is a little safe, I admit, but some of the tracks are stellar, and this record forms into a cohesive whole as a stream of interrelated dreamy sound, borrowing from the likes of shoegaze.

my only question is... does anyone ever hear clipping on this album? I sometimes hear crackling. maybe its the download that I'm listening to that's been compromised.

This was a great find. MasterWhitey sums it up perfectly below. 'Deliverance'would not be out of place on Sigur Ros's 'Takk' album

This album is a good chalenge. I had variable appreciation of the songs with each listening, but at the end, the title track is my favorite and L'eveil des muses is the only song I don't really like.

This album's incredibly beautiful and powerful! Can't believe it's not higher on the 2014 chart! Easily in my top 10 for the year! It's like a mix of Sigur Ros and Slowdive. Also, Voix Sereines is one of my favorite songs of the year

The overall package is only so-so, but "Delivrance" is positively transcendent.

I'm not going to deny that this is a very pretty album. However, prettiness isn't enough to make this a great album. I liked it, but aside from a couple of tracks I think Alcest was playing it a bit too safe in terms of the songwriting.

"Opale" and "Délivrance" are incredible

Your feedback for Shelter