Lullabies To Paralyze (studio album) by Queens Of The Stone Age 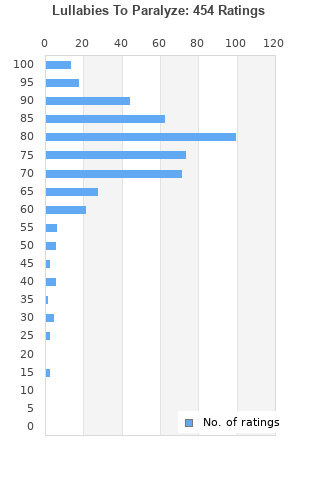 Lullabies To Paralyze is ranked 4th best out of 8 albums by Queens Of The Stone Age on BestEverAlbums.com.

The best album by Queens Of The Stone Age is Songs For The Deaf which is ranked number 129 in the list of all-time albums with a total rank score of 13,738. 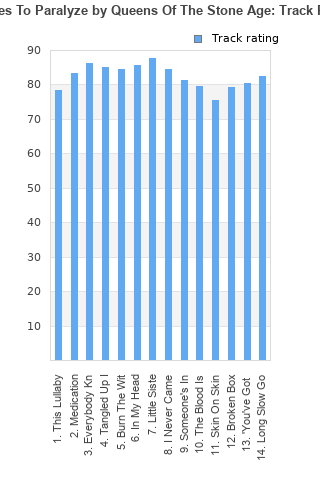 Everybody Knows That You Are Insane
Rating: 86 (99 votes)Comments:

Rating metrics: Outliers can be removed when calculating a mean average to dampen the effects of ratings outside the normal distribution. This figure is provided as the trimmed mean. A high standard deviation can be legitimate, but can sometimes indicate 'gaming' is occurring. Consider a simplified example* of an item receiving ratings of 100, 50, & 0. The mean average rating would be 50. However, ratings of 55, 50 & 45 could also result in the same average. The second average might be more trusted because there is more consensus around a particular rating (a lower deviation).
(*In practice, some albums can have several thousand ratings)
This album is rated in the top 6% of all albums on BestEverAlbums.com. This album has a Bayesian average rating of 76.9/100, a mean average of 75.8/100, and a trimmed mean (excluding outliers) of 77.0/100. The standard deviation for this album is 13.1.

Not a bad album by any means. Doesn't really justify its length but has some of their foot-tappiest songs

World building is what QOTSA is best at, and this album is the best example of that.

This album runs a bit long, but that doesn't mean the album is inconsistent. There are some really great songs on this album.
Favourites: Tangled up in Plaid, the blood is love

Definitely underrated. Not as good as the three albums that came before it, but still very good. Full of great songs like In My Head, Long Slow Goodbye, The Blood is Love.

My second favorite QotSA album. Very consistent with some of their most interesting and overall best songs overall.

A-Side is in my opinion much stronger than the B-Side. Overall, this is my second least favorite of their records, but still an overall favorite of mine. My personal favorite song on the album is Everybody Knows That You Are Insane. Little Sister and Tangled Up in Plaid are also amazing songs.

I think this is my least favorite QOTSA album.

I don't like "The Blood is Love", "Skin on Skin", or "You've Got A Killer Scene There, Man". The rest of the album is a masterpiece.

My least favorite Queens record, but fine nevertheless. There are a lot of memorable tracks here, while some tracks hides from my interest. The quality seems to deteriorate with the duration of the album. However, the spooky theme that is attempted functions successfully.

Your feedback for Lullabies To Paralyze