Some Cities (studio album) by Doves 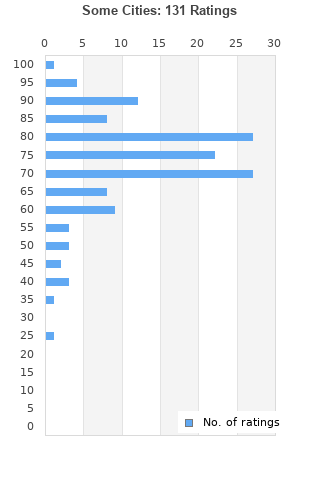 Doves - Some Cities - RARE UK Full Album Promo "Heavenly - HVNLP 50CDP" CD
Condition: Very Good
Time left: 11h 53m 15s
Ships to: Worldwide
$7.19
Go to store
Product prices and availability are accurate as of the date indicated and are subject to change. Any price and availability information displayed on the linked website at the time of purchase will apply to the purchase of this product.  See full search results on eBay

Some Cities is ranked 3rd best out of 8 albums by Doves on BestEverAlbums.com.

The best album by Doves is The Last Broadcast which is ranked number 1309 in the list of all-time albums with a total rank score of 1,382. 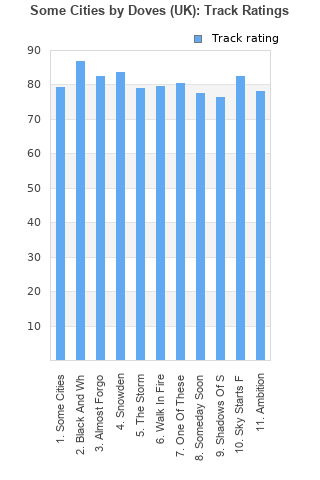 Rating metrics: Outliers can be removed when calculating a mean average to dampen the effects of ratings outside the normal distribution. This figure is provided as the trimmed mean. A high standard deviation can be legitimate, but can sometimes indicate 'gaming' is occurring. Consider a simplified example* of an item receiving ratings of 100, 50, & 0. The mean average rating would be 50. However, ratings of 55, 50 & 45 could also result in the same average. The second average might be more trusted because there is more consensus around a particular rating (a lower deviation).
(*In practice, some albums can have several thousand ratings)
This album has a Bayesian average rating of 73.9/100, a mean average of 73.6/100, and a trimmed mean (excluding outliers) of 73.9/100. The standard deviation for this album is 12.2.

Not as good as, lost souls, or, the last broadcast, but still a good album. It's slightly darker and more intimate than the first two records. Good but not great.

My first exposure to Doves was this album. I had heard about The Last Broadcast, but my local record store only had this one in stock. The experience was pretty predictable. Mind-blown. Totally floored. Went online and ordered their discography. I'm always impressed by how many layers they can cake on even as a three-piece.

This is every bit as good as "The Last Broadcast" imo

Doves' third offering that shows they have as much substance as Coldplay or Keane; if not more. 'The Storm' is one track that will forever stay with me and is in my top five favourite songs.

Your feedback for Some Cities