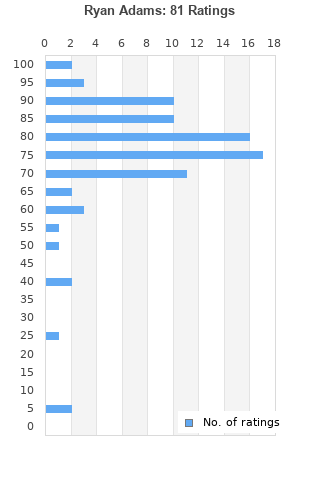 Ryan Adams is ranked 4th best out of 27 albums by Ryan Adams on BestEverAlbums.com.

The best album by Ryan Adams is Heartbreaker which is ranked number 962 in the list of all-time albums with a total rank score of 1,933. 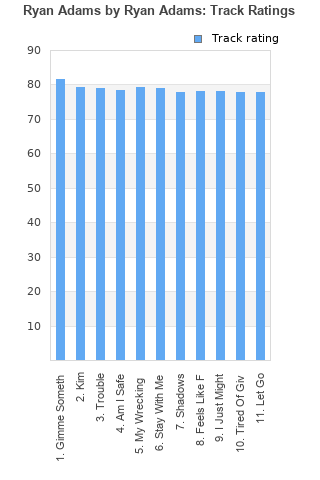 Rating metrics: Outliers can be removed when calculating a mean average to dampen the effects of ratings outside the normal distribution. This figure is provided as the trimmed mean. A high standard deviation can be legitimate, but can sometimes indicate 'gaming' is occurring. Consider a simplified example* of an item receiving ratings of 100, 50, & 0. The mean average rating would be 50. However, ratings of 55, 50 & 45 could also result in the same average. The second average might be more trusted because there is more consensus around a particular rating (a lower deviation).
(*In practice, some albums can have several thousand ratings)
This album is rated in the top 6% of all albums on BestEverAlbums.com. This album has a Bayesian average rating of 76.3/100, a mean average of 74.9/100, and a trimmed mean (excluding outliers) of 76.8/100. The standard deviation for this album is 17.1.

Yes, I've been on a huge Ryan Adams kick today.

Whereas 1989 and Prisoner have more of a Springsteen bent to them, this self-titled effort reminds me a lot more of Foreigner, or Icehouse, or mid-to-late-period Yes. Yet, whatever form Adams takes, his bona fides for emotive songwriting and performance always comes first. Seriously though. Given how low this ranks, even for its year, this is so slept on. I love it.

Although Ryan Adams--as you can tell from even a cursory look at my charts--is one of my favorite recording artists of the new century, I don't always love his aesthetic choices. One of the weirdest of all these was his decision to cast Cassandra Peterson, a.k.a. vampish horror hostess Elvira, in his video for "Gimme Something Good." As one of my friends remarked of the 63-year-old Elvira's cleavage-heavy performance in the video, "Good for her?" So Ryan's pop culture tastes can be, er, questionable. As for the songs on this album, this is about as close as Ryan Adams gets to a straight-ahead rock-and-roll album that isn't merely a nod to his influences. It's a driving collection of solidly written, energetically performed songs, catchy as hell and ideally suited for the Red Rocks Amphitheater performance I saw where Ryan and his band had their performances punctuated, and ultimately truncated, by one of the fiercest thunderstorms I've ever witnessed.

A return to a more rock sound after the acoustic leanings of the excellent, ashes and fire. This self titled album is a good record full of competent songs, but nothing really stands out as spectacular. Opening track, gimme something good, is probably the best track on the album, with, Kim, and, let go, also decent. Good then, but not great.

I have no history of liking Ryan's material but caught him on Jools Holland playing a few of these tracks and was blown away. The album is great.

early 80s AOR in the vein of Tom Petty, 38 Special, etc w/ a big sentimental streak . Immaculately produced & constructed (if you're into that kind of thing). Good fun! I can see Romanelli getting morning wood with this one.

Ryan Adams has returned with an immaculately-produced, strategically-calculated rock album that hits all of the right notes and comes with all of the effectively-timed hooks. As a result, he has delivered his best album since Jacksonville City Nights. However, what the content editor giveth he also taketh away; meaning, sure, you don't have the same eye-rolling messes of song ideas, but you also don't reach the same tear-enducing or guitar-pumping awesome ballads and rockers of his past. Still, I WILL TAKE IT and hope Ryan can build on this as well as his newfound-love of the live performance and his contentment with life in general (as witnessed by covering bryan adams lately).

Wow it isn't often I love an album so much upon first listen. The songs, production & overall "vibe" all works for me. Really love most all the tracks. Track 2 "Kim" was the weakest to me. "Stay With Me", "Tired Of Giving Up", "Feels Like Fire".... Good listening wow! MEZ

This album fits the description of a grower, I can see why people will like it and how some people wont. Good album with a touch of Petty in a few songs. Best tracks for me are "wrecking ball, I just might, and GSGood".

Your feedback for Ryan Adams