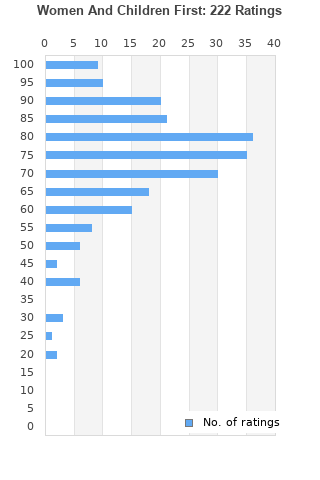 Van Halen Women And Children First CD
Condition: Very Good
Time left: 1h 27m 56s
Ships to: Worldwide
$6.99
Go to store
Product prices and availability are accurate as of the date indicated and are subject to change. Any price and availability information displayed on the linked website at the time of purchase will apply to the purchase of this product.  See full search results on eBay

Women And Children First is ranked 5th best out of 16 albums by Van Halen on BestEverAlbums.com.

The best album by Van Halen is Van Halen which is ranked number 363 in the list of all-time albums with a total rank score of 5,415. 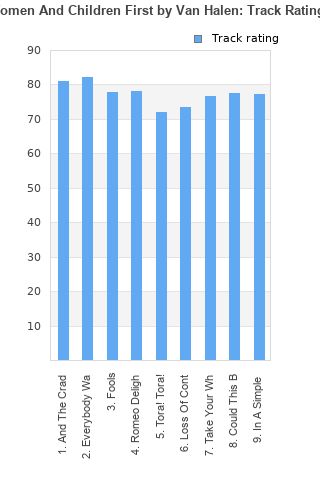 Rating metrics: Outliers can be removed when calculating a mean average to dampen the effects of ratings outside the normal distribution. This figure is provided as the trimmed mean. A high standard deviation can be legitimate, but can sometimes indicate 'gaming' is occurring. Consider a simplified example* of an item receiving ratings of 100, 50, & 0. The mean average rating would be 50. However, ratings of 55, 50 & 45 could also result in the same average. The second average might be more trusted because there is more consensus around a particular rating (a lower deviation).
(*In practice, some albums can have several thousand ratings)
This album is rated in the top 25% of all albums on BestEverAlbums.com. This album has a Bayesian average rating of 74.4/100, a mean average of 74.0/100, and a trimmed mean (excluding outliers) of 74.5/100. The standard deviation for this album is 15.6.

I'd say the front half is probably a bit stronger than the back half, but there is a bit more variety in Women and Children First than there is in the prior Van Halen albums. Fools is probably my favorite Van Halen deep cut of all time. I'd say the first four songs are the strongest.

Key Tracks: And the Cradle Will Rock, Everybody Wants Some, Fools, Romeo Delight.

My favourite Van Halen album. Such a great album.

Possibly my favorite VH album. It marks a change in the bands sound from their early party rock days to a more mature form of their music.

Van Halen's third album sees the band slightly branching out musically with hints of jazz and folk in their songs. Women and children first, is another rip roaring rock'n'roll record from a band who were untouchable at this time. And the cradle will rock, everybody wants some, and, take your whiskey home, are all great, while, could this be magic, goes for that jazz/rock sound. Another fine Van Halen album.

This is such a fun album to listen to haha. Almost like a guilty pleasure.

This one's alright. Not a lot of standouts.

This is actually a fairly cool album.

I read that Van Halen was the other finalist for "Rock N' Roll High School." The Ramones got it.

Both bands sound like they're forever 13, but "Women and Children First" would've made a great soundtrack. "And The Cradle Will Rock" is about teen delinquents, "Everybody Wants Some!" is about sex; "Romeo Delight" is about going to a high school rager; "In A Simple Rhyme" is about first love.

VH's first heavy blues song, "Fools," is great, but "Take Your Whiskey Home" is amazing, and "Could This Be Magic?" is brilliantly cheeky.

Van Halen expands its musical palette on "Women and Children First," maturing beyond the party anthems of "Van Halen" and "II," while retaining its lust for life.

The dark undercurrents and tension evident throughout "Women and Children First" are unlike anything heard on Van Halen's two 1970s albums. They're created by Eddie Van Halen's tension-and-release guitar rhythms - and add depth to Van Halen, which heretofore, had been dominated by David Lee Roth's (seemingly indomitable) sense of fun.

These dueling sensibilities - often fighting for attention in the same song, e.g. "Take Your Whiskey Home;" "Everybody Wants Some" - are what make Van Halen the most fascinating hard rock band since Led Zeppelin.

A definite step down from the two first albums, but still well worth the while. Suffers a bit from never being able to take off.

Your feedback for Women And Children First