End Of The Century (studio album) by Ramones 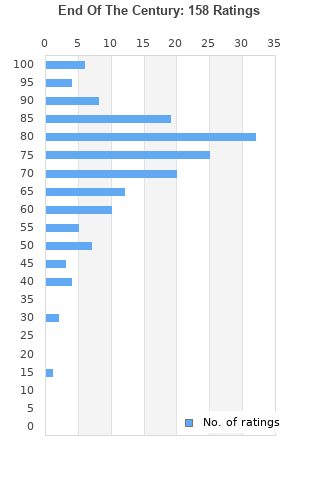 End Of The Century is ranked 6th best out of 24 albums by Ramones on BestEverAlbums.com.

The best album by Ramones is Ramones which is ranked number 213 in the list of all-time albums with a total rank score of 9,125. 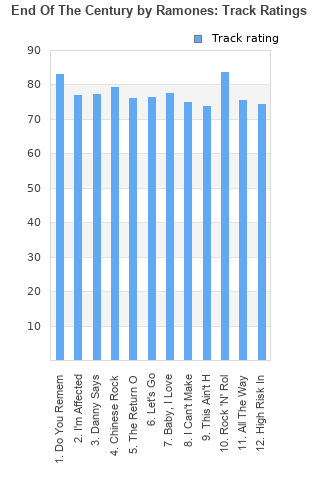 End Of The Century rankings

End Of The Century collection

End Of The Century ratings

Rating metrics: Outliers can be removed when calculating a mean average to dampen the effects of ratings outside the normal distribution. This figure is provided as the trimmed mean. A high standard deviation can be legitimate, but can sometimes indicate 'gaming' is occurring. Consider a simplified example* of an item receiving ratings of 100, 50, & 0. The mean average rating would be 50. However, ratings of 55, 50 & 45 could also result in the same average. The second average might be more trusted because there is more consensus around a particular rating (a lower deviation).
(*In practice, some albums can have several thousand ratings)
This album has a Bayesian average rating of 74.0/100, a mean average of 73.6/100, and a trimmed mean (excluding outliers) of 74.0/100. The standard deviation for this album is 15.0.

End Of The Century favourites

End Of The Century comments

Ramones 5th album was their infamous pairing with Phil Spector and has some of their most popular songs but it also has some odd misfires which at the time had not happened prior to.

Still a great record, but the cracks are starting to show.

Really good album. Not as good as any of their first four albums, and they never would match that quality again, but then again, those four albums were all awesome to amazing, so no knock on this album.

The Ramones are all polished up on this record by Phil Spector, and they sound great! Danny Says is one of my favorite Ramones tracks!

One would think this kind of slick, perfectionist production and The Ramones would be a terrible fit, but it's a surprisingly good combination. Spector really taps into the band's "pop" side without diluting them at all. Love this album !

listening to this, it is going round and round in my brain: imagine an album 50% phil spector, 50% ramones: it seems impossible to focus - but listening to end of the century is exactly what it is... funny.

Phil Spector got this one right

I read that Ramones beat out Van Halen to star in "Rock N' Roll High School." Both bands always sound like 13-year old delinquents, but if you love the Ramones, there's a little bit of "haven't we heard this before?"

Sticks mostly to what they have done so far, even taking lyrical themes from their more well known songs. 'The Return of Jackie and Judy' is the biggest example of that! Maybe it was done with the intention of humor? 'Do You Remember Rock & Roll Radio?' and 'Rock & Roll High School' are fantastic firebrand guitar explosions and the rest will please the fan of the band.

Your feedback for End Of The Century