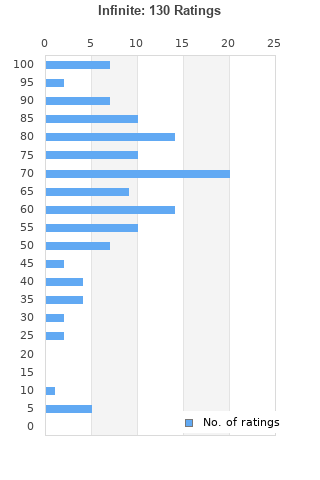 Eminem Infinite Clear Vinyl. Dr Dre
Condition: Used
Time left: 5d 1h 11m 5s
Ships to: Worldwide
£74.00
Go to store
Product prices and availability are accurate as of the date indicated and are subject to change. Any price and availability information displayed on the linked website at the time of purchase will apply to the purchase of this product.  See full search results on eBay

Infinite is ranked 7th best out of 16 albums by Eminem on BestEverAlbums.com.

The best album by Eminem is The Marshall Mathers LP which is ranked number 247 in the list of all-time albums with a total rank score of 8,096. 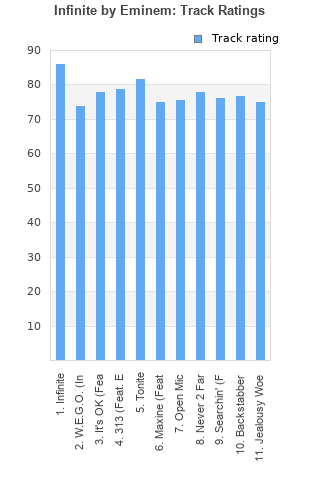 Rating metrics: Outliers can be removed when calculating a mean average to dampen the effects of ratings outside the normal distribution. This figure is provided as the trimmed mean. A high standard deviation can be legitimate, but can sometimes indicate 'gaming' is occurring. Consider a simplified example* of an item receiving ratings of 100, 50, & 0. The mean average rating would be 50. However, ratings of 55, 50 & 45 could also result in the same average. The second average might be more trusted because there is more consensus around a particular rating (a lower deviation).
(*In practice, some albums can have several thousand ratings)
This album has a Bayesian average rating of 65.9/100, a mean average of 65.2/100, and a trimmed mean (excluding outliers) of 65.2/100. The standard deviation for this album is 21.9.

One of the first albums that really got me into hiphop, but also listening to music as albums. The production, as mentioned, is not terribly interesting or very high quality, but it does lay down an interesting atmosphere that can't be described better than extremely 90's. Moments, where Em doesn't take himself so seriously and just focuses on doing straightforward cool stuff, are what makes Infinite so great, it feels sincere and real all while bringing serious chops and wordplay.

My favorite Eminem project! Although production is lacking, the wordplay, lyricism, and playful nature capture a really spectacular energy. "Tonite" is tied for my favorite Em song of all time. It sends a great message but still has that gritty dynamic wordplay that will have you jumping out of your seat. "313" is a local anthem that captures the energy of the Detroit hip hop scene perfectly, and "Backstabber" has ridiculously hilarious storytelling. 9/10

He should re-release this album!

the title track is insane, one of the best rap songs ever written, the lyricism is flawless

Your feedback for Infinite