Have We Met (album) by Destroyer 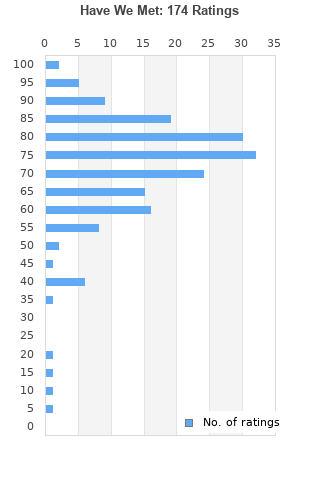 Have We Met is ranked 7th best out of 16 albums by Destroyer on BestEverAlbums.com.

The best album by Destroyer is Kaputt which is ranked number 488 in the list of all-time albums with a total rank score of 3,994. 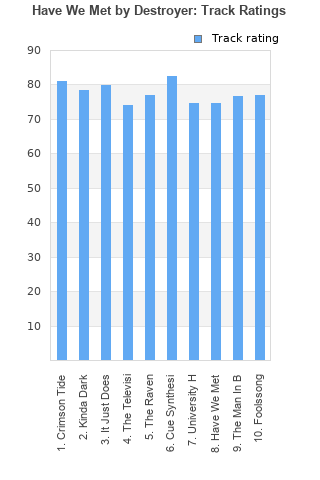 Have We Met rankings

Have We Met collection

Have We Met ratings

Rating metrics: Outliers can be removed when calculating a mean average to dampen the effects of ratings outside the normal distribution. This figure is provided as the trimmed mean. A high standard deviation can be legitimate, but can sometimes indicate 'gaming' is occurring. Consider a simplified example* of an item receiving ratings of 100, 50, & 0. The mean average rating would be 50. However, ratings of 55, 50 & 45 could also result in the same average. The second average might be more trusted because there is more consensus around a particular rating (a lower deviation).
(*In practice, some albums can have several thousand ratings)
This album has a mean average rating of 73.0/100. The trimmed mean (excluding outliers) is 73.9/100. The standard deviation for this album is 13.8.

Have We Met favourites

Have We Met comments

I hardly get any access to it. The music is ok, but I don’t like his singing style. For me it seems as As if the two don’t fit together.

Interesting for the most part but I get a sense of emotionlessness that I don't particularly enjoy in this context. My favorite parts of the album are when the guitar is broken out. I really like "Kinda Dark".

I'm not one to think throwing two genres together will cook up a third, but I'll have to admit it does create a certain mood. But overall it just doesn't evoke any strong emotions in me. Crossing genres has always been a great way to be bad at both without anyone noticing. And this band is no exception; his songwriting is not very exciting, and his synth sounds are very average; it sometimes sounds like they're just playing with some pre-sets.

Really average stuff. Not a fan of his voice. Some catchy hooks in there.

Slightly lethargic and overwrought, still a generally solid album from one of the greatest artists of the past 20 years

Contemplative, atmospheric and even haunting at times. It's really hard for me to find the words to describe this album. Definitely my favorite release of this year so far.

Your feedback for Have We Met